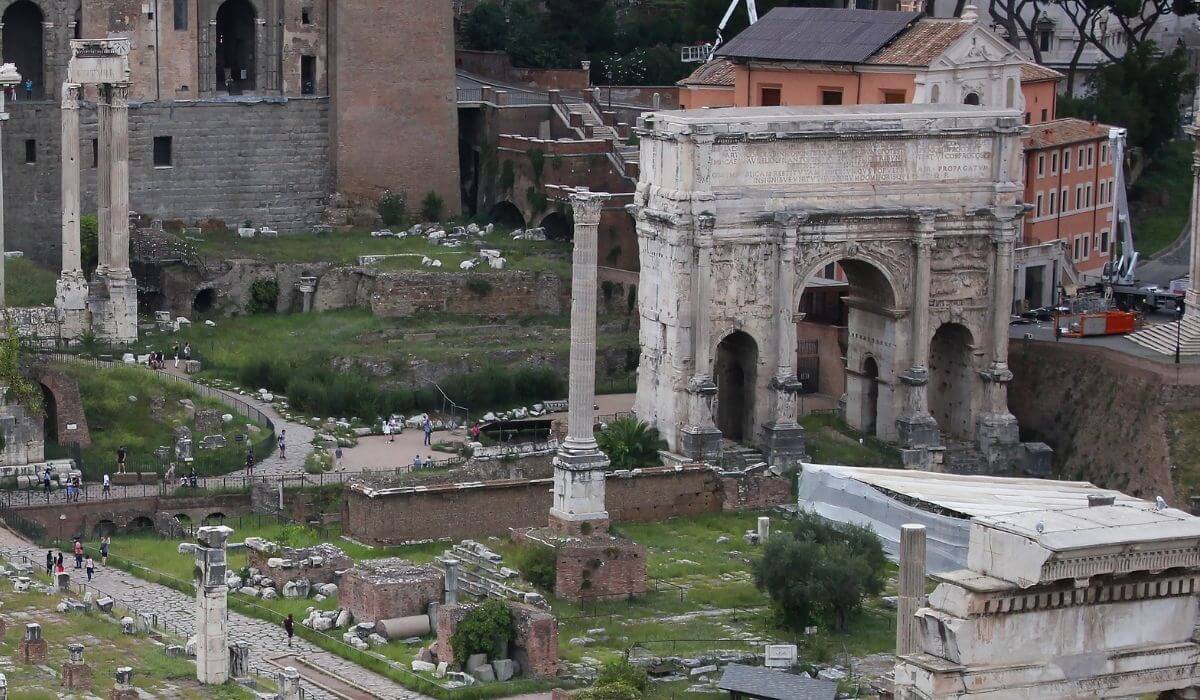 Today, you're going to learn what makes Arch of Septimius Severus so special.

In one of our last guides we told you all about the Arch of Titus – a first century monument that looks much like the Arch de Triomphe in Paris.

Now, we will check out another one – the Roman Arch of Septimius Severus. Located in the Roman Forum, this arch dates back to 203AD and is dedicated to the Emperor Septimus Severus.

Let’s learn about this interesting monument together.

To celebrate Severus’s victories over the Parthians (Persians) alongside his sons between 194 and 199AD, a white marble arch was constructed in the north east side of the Forum.

Inscriptions to Severus – and his kids Caracalla and Geta were etched into the arch with pride, and the structure sat on a huge travertine base.

At 23 meters tall, it was one of the empire’s tallest arches, taller even than the Arch of Constantine, which stood at 21 meters.

It is one of the best kept and preserved monuments in the Roman Forum, largely because it was part of a church and cared for by a wealthy family.

In the fourth century AD a road was built under the arch – you can still see some of the bumps and scrapes caused by through traffic at the internal base of the arch!

Who Built The Arch Of Septimius Severus?

The Arch was built in honor of Severus by the Senate, who wanted to offer the Emperor the chance to have a triumphal march through the arch.

Unfortunately. Severus could not partake in a march, because he had gout! The monument was built anyway and still stands tall and proud to this day.

How Was The Arch Of Septimius Severus Built?

The Arch of Septimius was built on a large travertine base, and constructed of white marble.

It was built 21 meters high and 23 meters wide. It was decided to place it close to the meeting place of the Senate – the Curia Julia.

Four huge reliefs in 4x5m sections depict scenes from the battle with the Parthians. Unfortunately, the sculptures and statues on the top, as well as the stairs, are long lost to time.

Why Was The Arch Of Septimius Severus Built?

The Arch of Septimius Severus was built to commemorate several battles in the Parthian wars, and to honor Severus.

The Emperor’s 2 sons are also commemorated in the form of reliefs, however, Geta’s were eventually removed after his brother had him assassinated!

On the attic of the arch is an inscription that honors the war efforts of Severus and his family.

Originally it was gilded in bronze, but that has long since weathered away. It basically thanked Severus and his two sons for ‘restoring the Republic and expanding the dominion of the Roman people'.

However, after Geta was assassinated, all reference to the “most noble Caesar Geta” was removed and replaced.

You can buy some stunning Arch of Septimius drawings as artwork for your own home!

Take a look at this piece, inspired by the elevation plan of the monument. The British Museum holds a gorgeous drawing by John Warwick Smith of the Arch and surrounding buildings.

Did Each Side Of The Arch Of Septimius Severus Tell A Different Story?

Yes – there are four tales told on the Arch of Septimius – two on each side.

On the side facing the Forum the left panel shows a battle and the liberation of Nisibis. The right panel depicts some Parthians surrendering, amongst others.

One the opposite side of the arch – the side that faces the Capitoline – you can see the city of Seleucia falling as well as Septimius rallying his triumphant army.

Are there more Septimus Severus Arches Except in Rome?

Replica arches can be found in Libya and Palmyra, both of which were part of the Roman Empire. In 1928 the arch in Libya – located at Leptis Magna – was completely restored by archeologists when they found it.

In Palmyra, the remains of the arch were destroyed by Isis.

Has the Septimus Severus Arch Ever been Destroyed

No. The arch in Rome has never been destroyed, although one of its sides was damaged in a fire and has been slightly eroded by the elements.

Do I Need Tickets for this Monument?

Yes, you need tickets to enter the Roman Forum where the Arch of Septimius Severus is located.

Tips – Check out our full guide on how to get skip-the-line tickets for the Roman Forum and the Colosseum.

Where Is The Arch Of Septimius Severus Located

This monument is found in the Roman Forum, and is located in the north east end of the Forum. Check out this map to help you get your bearings.

We recommend to check out the Roman Forum as soon as possible in the morning – aim to get there by 9am – or better still in the late afternoon when the tour busses have largely left for the day.

If you must visit during the core hours – 10am to about 4pm – then consider buying a skip the line ticket for the Roman Forum.

If you must visit during the core hours – 10am to about 4pm – them consider buying a skip the line ticket for the Roman Forum.

For the closest hotel to the Roman Forum – and featuring ancient views from its windows – check out the Hotel Forum. Housed in an 18th century building right opposite the Forum, double rooms start at around €350.

If you don’t fancy spending that much then the Madonna de’Monti Suites are just 150m from the Roman Forum and feature rooms from as little as €130.

What was the Arch of Septimius Severus used for?

The Arch of Septimius Severus was mainly decorational , built to commemorate the military gain of Severus.

How many arches does the Arch of Septimius Severus have?

There are 3 arches - one was for traffic and 2 for pedestrians on either side.

How tall is the arch of Septimius Severus?

What is the arch of Septimius Severus made of?

Like many other arches, it is made of marble.

How old is the Arch of Septimius Severus?

The arch of Septimius was built in 203 AD.

Whet your appetite for a trip to the Roman Forum and the Colosseum? Then head on over to our other resources to start planning the rest of your trip! And don’t forget to consider a city pass or card to help you maximize your budget.