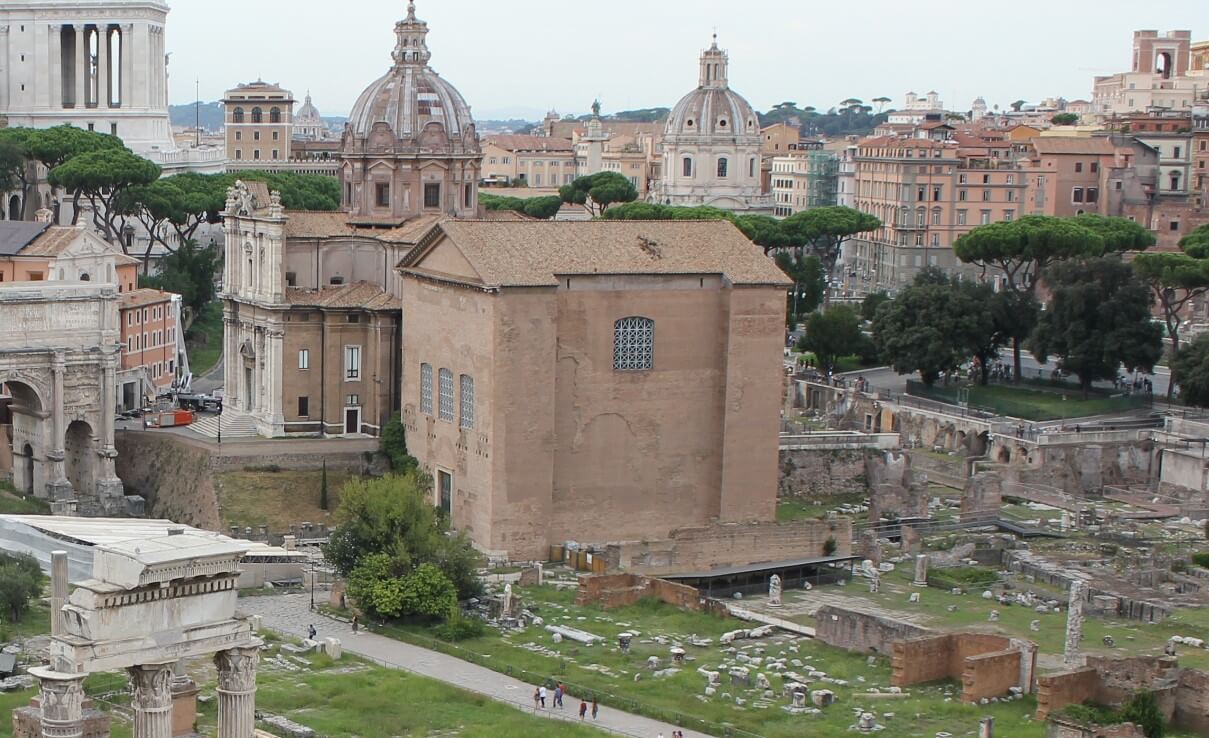 The Curia Julia: All about Ancient Roman Senate Building

The Curia Julia is one of the oldest senates, or “senate houses” – known as a Curia in ancient Rome. It is the third such construction of a senate, commissioned by Julius Caesar in 44BC.

It replaced the second senate – the Curia Cornelia – and construction was completed after Julius Caesar was killed. It was actually Augustus Caesar who finished the job in 29BC.

A curia was a pretty steady staple of Roman life. The preceding curias had been constructed on an ancient temple. The Curia Julia was destroyed by fire damage in the 2nd century AD.

It was then reconstructed by Diocletian in subsequent years – you can still see the remnants of this renovation today in the Roman Forum Curia.

Details about the Curia of the Roman Forum

The construction is made of brick and marble and is accessed by stairs that lead to a pair of bronze doors. Actually, the doors themselves aren’t the originals – these were removed to the Basilica of St John the Lateran (and can still be seen there!) The Romans really did love to lift bits and pieces off other buildings and reuse them…

Inside it is estimated that the meeting house would have probably held about 300 officials comfortably – that was about half of the body of the Senate. The best feature on the inside is undoubtedly the colourful floor with its intricate patterns. There are also 2 massive reliefs depicting scenes from the Trajan period. The ceiling is also a beautiful wooden structure that is often overlooked.

Today the senate stands proud amongst a wider open air museum of Roman ruins. Since it later formed part of a church, the former Rome Senate building has remained largely intact. In normal times (when Corona is away!)

It can be visited as part of a trip to the Roman Forum as you walk along the Via Sacra. You cannot miss it as it is one of the only largely intact buildings.

The Restoration of the Rome Curia

Following the fire in 283 AD that gutted the Rome Senate house, Diocletian rebuilt the building to mirror the previous. Using the exact dimensions as last time, the building was painstakingly reconstructed.

The restoration put the building in good stead and it managed to survive to 630AD when it was incorporated into a church. Another restoration was undertaken in 1938 on the second millennial anniversary of Augustus by Mussolini.

The importance of the Rome senate building

The Curia Julia, and other senate buildings, were of extreme importance. It was here that the emperors and senators would meet and discuss topics of the day. It was the centre of the administration of the Roman Empire. Nowadays it serves as an important example of third century reconstruction over the original site.

How to visit the Roman Forum Curia

You can visit this ancient Roman Senate building as part of a tour of the Roman Forum and the Colosseum. There are tickets available that cover both attractions in one.

Here are your options:

Location & How to get there

Getting to the Roman Forum is easy. The main entrance is on the Via dei Fori Imperiali heading away from the Colosseum toward the Piazza Venezia. Take the metro for the easiest route and get off at the Colosseum.

Hotels near to the ancient Roman Senate building

There are several hotels within a stone throw to the Curia Julia. Check them out below:

Otivm Hotel might be hard to pronounce but it is not hard to see why it gets great reviews. The rooms are simple but modern and stylish, and the rood terrace boasts fabulous views. Breakfast is pretty good and is included in the price.

If you fancy a splurge near the Roman Forum this might be one to consider. The NH Collection Rome Fori Imperali boasts stunning interiors and simply breathtaking outdoor spaces.

To get one of the rooms with the delicious breakfast included will set you back at about €200 for a standard double.

Here are some of our top received questions about this Rome Senate building.

What is the Curia Julia?

The Curia Julia is a former Roman senate located within the Roman Forum, Rome.

When was the Curia Julia built?

It is thought the construction was originally made in 29BC, and was damaged by fire in 283AD, and was therefore reconstructed after this.

Who built the Curia Julia?

It was commissioned by Julius Caesar in 44BC but finished by Augustus Caesar.

What does Curia Julia mean?

The Curia in this context was basically the word for the meeting place or “senate” of those people in officially designated political groups, or “curia”. The word Julia refers to Julius Caesar.

What was the Curia Julia used for?

As a meeting point, the building was used to discuss politics and other administrative matters.

Who restored the Curia Julia?

After the 283AD fire, the building was restored by Diocletian.

That’s the lowdown on the Curia Julia! If you are planning your trip to the Roman Forum and other ancient attractions in Rome, why not check out our guide to Roman Ruins.

Or, our section on the top things to do in Rome may also be of interest! And of course, you can also find plenty of tips and tricks on how to get skip the line tickets or city passes.