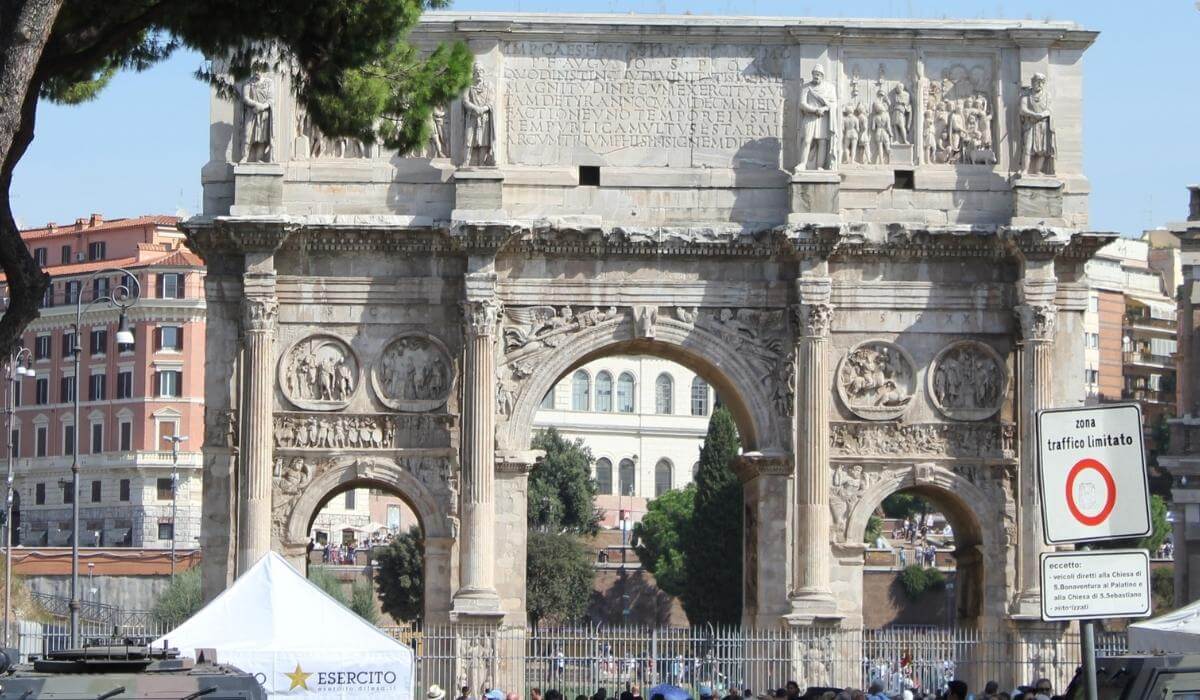 The name of this arch – the Triumphal Arch of Constantine – might give away its purpose. It is a dedicated memorial to Constantine the Great, who was a Roman Emperor.

In this guide, we will uncover all about the significance of this arch in Rome, as well as its history.

The arch is worth stopping off at during a tour of Rome, and the trip will be even more valuable if you can impress your friends with your knowledge at the same time!

In 312 AD, Emperor Constantine won the battle of the Milvian Bridge against Emperor Maxentius. Maxentius drowned in the river, and Constantine came closer to being the sole Emperor.

To celebrate this victory, the Constantine Monument was designed and erected near to the Colosseum. It sits over the Via Triumphalis – this is the road down which the victors from Roman battles would parade. Completed in 315, the arch is a striking feature in modern Rome.

Although it is dedicated to the emperor whose name was given to Constaninople – now Istanbul – the Arch of Constantine architect pieced together remnants of other key arches dedicated to the likes of Hadrian or Trajan in a hodge podge architectural masterpiece.

So you are looking at an amazing melange of history as you gaze up.

The Arch of Constantine is hugely significant in terms of early Roman Christianity. Constantine credited his victory in the Milvian Bridge Battle to God.

It says that this event set Constantine off on his journey to Christianity, although this fact is disputed. What is clear however is that the persecution of Christians did stop under his rule.

The long and drawn out period of hardship for believers ended, and eventually the official religion of the Roman Empire became Christianity.

As a result, the Arch of Constantine’s significance comes from the fact that it stands for the origin of the Chritian faith in the Roman Empire.

What Does the Arch of Constantine Represent to the Romans Today

Modern day Romans may not think much about the arch on a day to day basis, but it’s image is as iconic as the Colosseum.

Recently renovated, the arch stands for the old power of the Roman Empire, the Christian beliefs of the population in general, and the overall strength of Rome throughout the edges.

Coupled with the historical value associated with this and other similar triumphal arches in Rome, this architectural gem holds huge weight in terms of Rome’ cultural heritage.

The Constantine Monument sure is impressive. Rather than staring at it for a few seconds without understanding its significance, let’s take a look at some of the details on the arch.

It stands at just under 70 feet high and 85 feet wide. It is also an impressive 24 feet in depth!

Just how they managed to build structures like this back in the day is astounding enough in itself. The fact that it is still standing is also of course pretty cool!

Building Materials – What Is the Arch of Constantine Made Of?

The main body of the arch is made of a white marble with blue hues – known as Proconnesian marble – which forms the three arches. Flanking the three arches are four Numidian Yellow columns.

It is also understood that the builders added previously existing parts of other arches or structures to make the final piece.

On the top of the arch is the engraved tribute to Emperor Constantine:

To the emperor Flavius Constantine the Great
pious and fortunate, the Senate and People of Rome
because by divine inspiration and his own greatness of spirit
with his army
on both the tyrant and all his
faction at once in rightful
battle he avenged the State
dedicated this arch as a mark of triumph.

Scenes Depicted on the Arch of Constantine

The Arch of Constantine South Side depicts military scenes, while the North Side of the arch shows civil scenes. The intricate details could have you staring at the arch for hours!

The Battle of the Milvian Bridge is of course heavily depicted on the scenes, being the key reason for the build, however there are other scenes including the siege of Verona depicted.

There is also a part showing Constantine addressing onlookers in the Forum Romanum.

Arch of Constantine Facts You Won’t Hear from Your Guide

Let’s check out some facts about the Arch of Constantine that you can use to impress your travel companions!

Even if you choose not to hire a tour guide when in Rome, you can still get enjoy the details of this structure:

What Famous Attractions Surround the Arch of Constantine?

You are certainly among great things if you are standing here.

The Arco di Constantino is within walking distance of the Roman Forum, the Colosseum and the Pantheon. You’ll be spoiled for choice with where to head to next!

Tip – Check out this Arch of Constantine map in order to get your bearings.

How to Get Tickets

Good news – especially if you are a budget traveller in Rome. The Arch of Constantine, located right near the Colosseum, is completely free to visit! Don’t get duped by buying “tickets” for this attraction in Rome, because they are simply just not required.

However, you can get tours that incorporate a stop at the arch and might interest those who want to know more about it from an official tour guide. Check out this Colosseum and Roman Forum tour which starts at about €30 per person.

For slightly more – €37 per person – you can get a much more detailed tour, that will link all of the main attractions together as part of a visit to the Colosseum.

Where Is this Monument Located?

The Arch of Constantine is located right near the Colosseum on the Via di San Gregorio. You can get there by taking the underground to Colosseo on Metro Line B.

Love the arch so much that you want a view of it?

You may struggle to get one with a clear view, as the Arch is mainly hidden by the Colosseum. You can however find amazing hotels right near the Arch of Constantine with great Colosseum views. Then, you will know that the attraction is just a stone’s throw away.

Check out the Colosseo Panoramic Rooms – with double starting at around €130 and a stunning view right out the window, you will feel utterly spoiled even on a budget.

However, if you want to splurge or have a special occasion to mark, the Hotel Palazzo Manfredi offers wonderful interiors right outside the Colosseum. Here however you will need to bring your wallet or perhaps empty your bank account. You’ll need around €650 a night for the pleasure of a double room here.

Finally, Colosseum Corner is another with Colosseum Views – and you will know the Arch of Constantine is peeping at you from just behind it.

Why was the Arch of Constantine built?

It was built to commemorate Constantine’s victory in battle at Milvian Bridge.

When was the Arch of Constantine built?

Who made the Arch of Constantine?

The Roman Senate requested and funded the build of this monument.

How tall and how old is the Arch of Constantine?

Can you get married by the Arch of Constantine?

We did a quick check - you can at the very least get your pictures taken at this amazing place!

This is an epic arch that shouldn’t be missed when you are visiting Rome. And since it is so close to the Colosseum you have no excuse but to see it. Now, check out the rest of this site to help you plan your trip to the Colosseum.

If you are opting for a city pass we have plenty of information to help you make your decision.