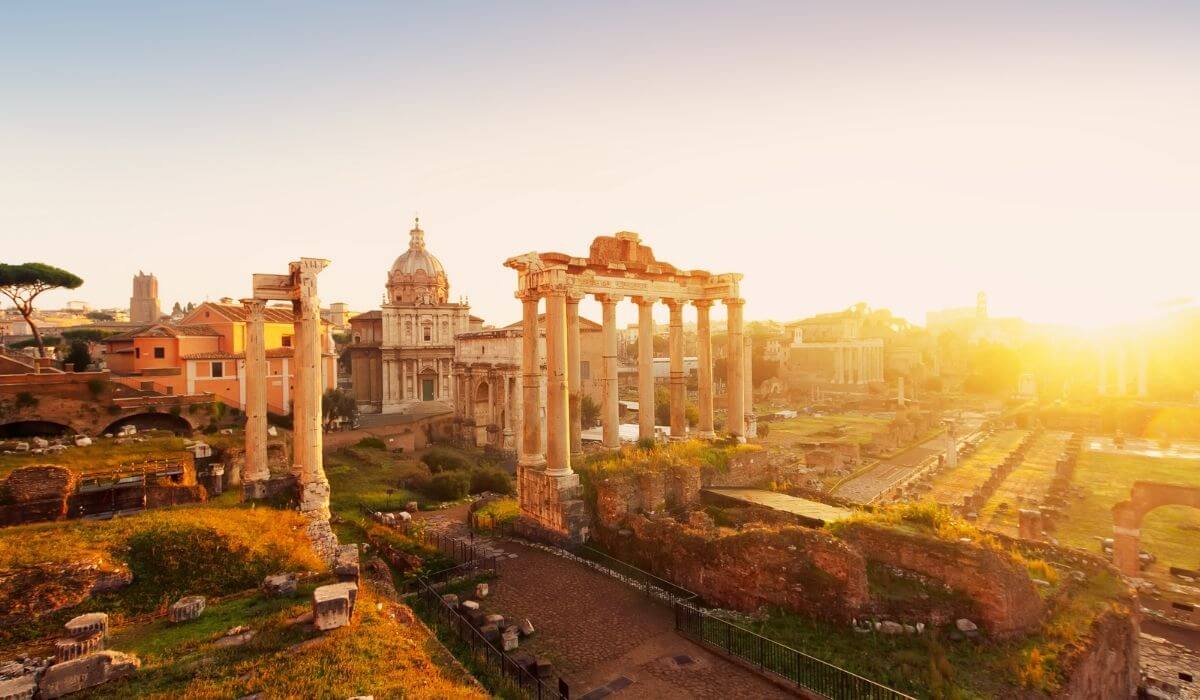 Dedicated to the Roman goddess Concordia – more about her later – the Temple of Concord remains are worth a stop on any tour of the Roman Forum. Founded in the 4th century BC, there were several constructions over time of this impressive building.

This interesting batch of monuments can be found in the Roman Forum, steps away from some of the more famous attractions such as the Curia Julia.

Let’s get stuck into the details.

What History Says About The Temple Of Concordia Rome

There are several disputed theories as to how the temple actually came about.

One of the most prominent is that a prominent statesman known as Camillus pledged to construct a temple of harmony around 367BC. It is believed the idea came about to support the new found peace between the plebeians and patricians. This theory remains disputed, as no records actually show its construction at that time.

What is generally agreed however is that the structure definitely existed by 121 BC, either as a new build or some sort of Temple of Concord reconstruction. A restoration was completed around 10AD, upgrading the features with opulent marble.

A final reconstruction is rumored to have potentially happened later, perhaps after a fire in 284 AD. Eventually, it fell into disrepair and was dismantled in the mid 15th century.

Is It Known Who Built The Temple Of Concord in Rome?

Not exactly. There are claims that Camillus launched the idea, and the temple was built in 281 BC by Manlius. Tiberius is credited for completing the restoration in 10AD.

Wondering What The Temple Of Concord Was Used For?

Although the Temple of Concord was mainly built as a dedication to the goddess Concordia, it also had practical uses.

Meetings of the Roman Senate were held here, during which matters of state business were discussed. In addition, the Arval Brethren, a group of priests who would meet to make offerings to the gods in the hope of a great annual harvest.

More about the Roman Goddess Concordia

So just who was this goddess Concordia, and why all the fuss? Well, in ancient Roman tradition, Concordia is the goddess of “concord” or harmony.

It is also the Latin word for the same meaning. It is for this reason that Camillus chose her as the symbol of his celebration of peace between the plebeians and patricians. As such, the temple of the goddess Concordia was born.

She is often shown in art and sculptures holding symbols of peace and harmony such as the staff held usually by Hermes in Greek mythology. In other works, she is seen in the background as prominent politicians or members of the ruling elite shake hands.

Facts about the Temple Of Concord Architecture

The original Temple of Concord Augustus is believed to have had eight striking columns made from travertine and a large rectangle bottom.

In the later reconstructions, a large internal chamber known as a cello was accessed through the striking portico. Statues of Mercury and Hercules flanked the access stairs – a symbol of prosperity and security, and statues of Concordia, Pax and Salus were found on the portico.

What Do We Know About The Temple Of Concord Reconstruction?

During the reign of Augustus, the Temple was destroyed and rebuilt by Tiberius, starting around 7BC. The new structure was inaugurated in 10AD.

Are There More Temples of Concord around the World?

In 2002, excavation in the town of Merida in Spain revealed a replica of the Temple of Concord. Who knows how many others are out there!

3 Other Significant Monuments to See at the Roman Forum

The Roman Forum is full of ancient treasures!

Here are three of our favorites:

Do I Need Tickets For A Visit?

The Temple of Concord can only be accessed with tickets to the wider Roman Forum.

There is a lot of information out there, and a lot from which to choose. Check out this idea for skip the line tickets or perhaps consider a guided tour to maximize the experience.

Tip – If you want to research yourself, then check out our complete guide to skip the line tickets to the Roman forum on our website.

Temple Of Concord Map & How to Get there

The Roman forum is located near the Colosseum, so it is easy to walk there after you see this star attraction. Take the Metro to Colosseo to start your ancient Rome visit.

Best Time to Visit This Monument

In peak season, we recommend you to visit at about 2 hours before closing. The large tour groups will be gone by then and you will have the place to yourself.

If you are looking for accommodation around the Roman Forum, then there is no better place to go than our extensive Colosseum Hotel Guide.

Some of our favorite hotels in the Roman Forum area are featured there, including the conveniently located Hotel Colosseum and the Hotel Italia, both good mid range and budget options.

When was the Roman Temple of Concord built?

It is not exactly known when the first version of the Temple of Concord was actually built, but there is evidence to suggest it was already constructed by 121 BC.

What does the Temple of Concordia represent for the Roman people today?

Like many of the structures in the Roman Forum, the Temple of Concord represents Rome’s epic place in the history book of Europe.

What was the Temple of Concordia in Rome made of?

Travertine columns and - in later reconstructions - marble cladding made sure the Temple of Concord was the most beautiful in Rome!

What happened to the Roman Temple of Concord?

The temple eventually fell into disrepair and was dismantled in the mid 15th century.

The remains of the Temple of Concord are not particularly striking – but the original temple was certainly a beautiful sight! Make sure to check out the site when you visit the wider Roman Forum.