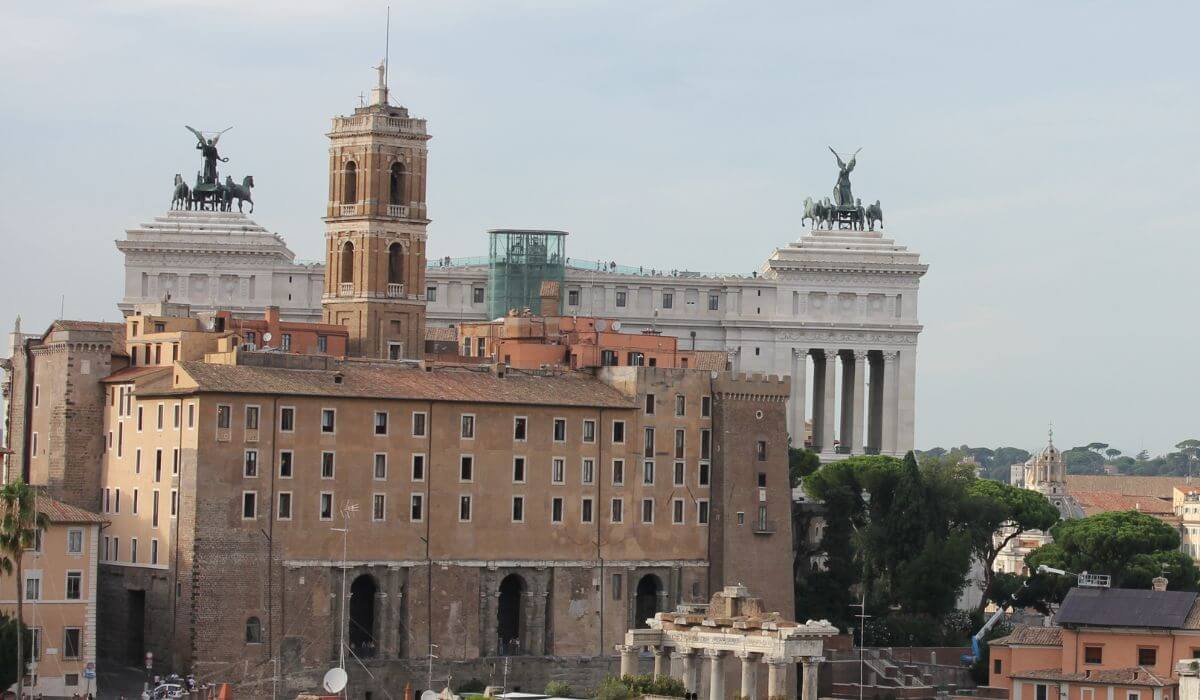 Tabularium In Rome: The Purpose of the Building & Tips for Visiting

Located on the edge of the Capitoline Hill, the Tabularium was a place where the ancient Romans kept important documents and records.

It was found in the Roman Forum, and also was home to the day to day business of many Roman officials.

Let’s find out more about this ancient building together.

The History Of Tabularium Rome

Rome’s Tabularium is thought to have been constructed in 78BC by then dictator Cornelius Sulla.

Its construction was part of a largely redevelopment plan for Rome, instigated off the back of the fire in 83BC that had caused extensive damage to the Capitoline Hill.

Nowadays, its ruins can be seen on a visit to the Capitoline Museums. Actually, the structure is very well preserved because it was in continuous occupation.

But before you go, you should read up on some interesting facts!

What Was The Tabularium Used For?

The Tabularium’s modern day equivalent would be a national archive.

In fact, the word Tabularium in Latin is translated as just that – archive. There is evidence to suggest that the purpose of the Tabularium was to hold information pertaining to Rome’s history and founding – largely on bronze tablets.

The structure likely also included things like all the laws and the deeds of the state of Rome. As such, the significance of the Tabularium cannot be overlooked.

The building still stands to this present day, although the top floors were taken off in the 16th century so that the Capitoline Museums could be built.

The fact that the Tabularium has stood the test of time is pretty impressive! It is particularly of note today because of the famous view from Tabularium outlook – it is known to be one of the best in Rome!

You can see the remains on a visit to the Capitoline Museums. Today you can easily distinguish the base structure and the columns of the Tabularium from the newer addition of the Capitoline museums on top.

Are There Any Rome Tabularium Inscriptions?

An inscription on the Tabularium was discovered which allowed historians to date the structure.

Whilst Cornelius Sulla ordered the build, it is Consul Q. Lutatius Catulus who is identified on the inscription as the one who completed it.

There is also a record of another inscription that confirmed the use of the building as a Tabularium. However, there are no other markings or written sources discovered to date that elaborate on this point further.

Things To See In and Around Tabularium

The Ancient Roman Tabularium – and the Capitoline Museums – are in a prime sightseeing hotspot of Rome.

The Roman Forum is teeming with ancient attractions and temples, such as the Temple of Venus and the Temple of Saturn. The Capitoline Museums themselves are well with a visit, and most people combine it with a trip over to the nearby Colosseum.

The original structure was built in travertine blocks, whilst the internals are largely formed of concrete.

The main dimensions are largely cited in reference to its huge corridor, which stood at a length of 220 feet and at 49 feet above the forum, boarded on either side by beautiful arches.

How Many Floors Are There In The Tabularium

The original building consisted of three floors, and when the Capitoline Museums were built the top floor was removed, and an additional three floors were added.

There was a basement floor and then the first floor which had eleven arched windows. They were eventually covered up when the Tabularium was turned into a fortress but you can still see the outline today and even look out the three arched windows remaining.

It is thought that this floor actually served little purpose beyond a walkway between certain points of the Capitoline Hill. The top floor, removed in the 16th century, has been replaced by the museums. Check out Tabularium Floor Plan to get a better feel for the structure here.

5 Facts About The Tabularium

How To Get Tickets For Rome Tabularium Tour

The only way to access the inner part of the Tabularium is to visit the Capitoline Museums.

If you have a specific interest, you may want to book a tour to get the maximum benefit. The best way to get a sense for the Tabularium’s location and importance in the Roman Forum would be to take a Forum and Capitoline Tour such as this one that starts from €78.

The only exceptions are December 24th and 31st when they close at 2 pm. On Jan 1st, May 1st, and Christmas Day the museums are closed completely to visitors.

Tip – Like many attractions in Rome, it is good to visit towards the end of the day when the big tour groups have left.

Location And How To Get There

The Capitoline Museums are located on the stunning Piazza del Campidoglio. Take metro line B from Termini to the Colosseo station, then it is about a 10-13 minute walk from there.

3 Attractions Not To Miss While You Are Nearby

The Colosseum, The Roman Forum and the famous Monumento a Víctor Manuel II (also known as the Wedding Cake) are all within easy walking distance of the Tabularium.

When was the Tabularium built?

It was built in 78BC and is stupendously well preserved considering its age.

Who built the Tabularium?

The dictator Sulla had Quintus Lutatius Catulus build the Tabularium.

What was the significance of the Tabularium?

It is believed this building was of significant importance as it housed a number of important documents, likely including the deeds to Rome.

Now you can impress your friends with some random facts about the Tabularium, it is time to impress them even more with your organization skills!

Consider a city pass or travel card to not only manage your budget, but to help you plan your trip in intricate detail.