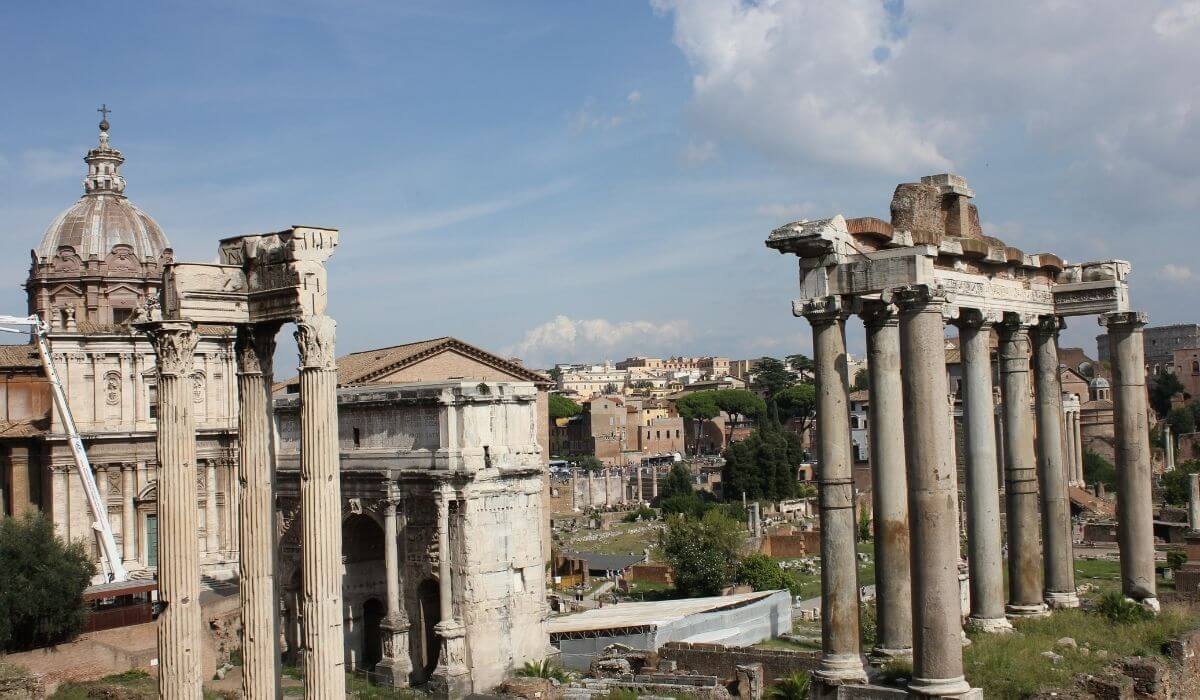 The Temple of Saturn In Rome: History Facts & Why Was the Temple Built

Consecrated in 498 BC, the construction of the Temple of Saturn is believed to be one of the oldest of such sacred structures in Rome.

It is rumoured to have been built on an even older existing altar to Saturn that existed on the same spot. In order to honour the god Saturn – who was the god of agriculture – offerings were brought and the Saturnalia festival was celebrated here. Eventually, the temple also became a head of government and administrative centre.

It’s ruins can be seen today during a Colosseum and Roman Forum tour. Several rebuilds needed to be undertaken over the centuries, and the Republican era temple of the 5th century BC was replaced by one in the 1st century BC.

The structure that you can see today consists of the remains of the final building that was restored during late antiquity.

Temple of Saturn History Including the Reconstruction

The first temple was constructed in the first century BC – supposedly by Rome’s last king Tarquinius Superbus.

It is believed to have survived right through to the 1st Century BC with a few upgrades as the building began to age. Finally, it became due for a huge upgrade around 42BC.

Eventually, it appears the temple was damaged by fire and again restored in or around the 4th century AD.

An inscription on the remains from that time reads “SENATVS POPVLUSQVE ROMANVS / INCENDIO CONSVMPTVM” and alludes to the fact that the building was destroyed by fire.

What Was the Temple of Saturn Rome Used For?

Saturn was the god of agriculture and wealth, and local Romans would have brought offerings in the form of fruits and vegetables or grains.

As wealth grew, the temple would eventually become a temporary store for the state treasury, reflecting the traditional belief that Saturn protected the earnings of the residents. At times, national archives and standards were also kept safe in the temple.

The temple was also the focal point of the Saturnalia celebrations, where Romans brought sacrifices before having a massive street party.

The Temple of Saturn remains that are visible today consist of the columns that have become one of Rome’s most iconic images.

The eight granite columns are topped off with the inscription about the Temple of Saturn reconstruction, and they rest on huge blocks of travertine.

The majority of the most recent building’s materials were taken from other buildings or structures – only a couple of the columns for example are made from one single piece of stone.

Cool Facts About the Temple of Saturn

Check out these Temple of Saturn facts so you can impress your friends with your great knowledge!

Throw a couple of these into casual conversation to look like an expert!

What Were Religious Duties Of The Temple Of Saturn

The temple of Saturn was dedicated to the god of Saturn. Inside stood a huge ivory statue of the god of agriculture.

Romans brought gifts and offerings as a thank you for enjoying a good harvest. By keeping the god happy they would be guaranteed further success with their crops and businesses.

How To Get Tickets For the Temple of Saturn Roman Forum

You can visit the remains of the Temple of Saturn as part of a tour of the Roman Forum and the Colosseum.

You’ll need a ticket – you can get one to access the Roman Forum on it’s own, however most first time visitors to Rome prefer to take a combined ticket including the Colosseum and the Forum.

Check out the up to date ticket prices online here.

How to Find Temple Of Saturn Location & Maps

The Temple of Saturn is located in the southwestern end of the Roman Forum.

Take a look at the map to get your bearings. Luckily it is really easy to get to the Roman Forum – the Colosseum which is nearby has its very own metro station!

Tip – Take line B to the Colosseo station and you will find the entrance on the Via dei Fori Imperiali.

The Temple of Saturn is one of the most popular attractions in Rome.

As such, we get a LOT of questions about it. Check out some of the most common here.

Who Built the Temple of Saturn?

How big was the Temple of Saturn?

How old is the Temple of Saturn?

There has been a temple on the same site since 498BC.

How tall is the Temple of Saturn?

The original was 19m in height.

When was the Temple of Saturn built?

The first temple was built in 498BC.

Who destroyed the Temple of Saturn?

The temple was destroyed in the middle of the 15th century as the Roman Forum began to lose importance.

Why was the Temple of Saturn built?

It was constructed in dedication to the Roman god Saturn.

The Temple of Saturn in Rome is just one of many great historical treasures on display in the remains of the Roman Forum!

Combine your trip with a combo visit to the Colosseum so you can hit off many of the greatest attractions in Rome in one go.

Check out some of the other classic Roman Forum things to see here to get you in the mood.