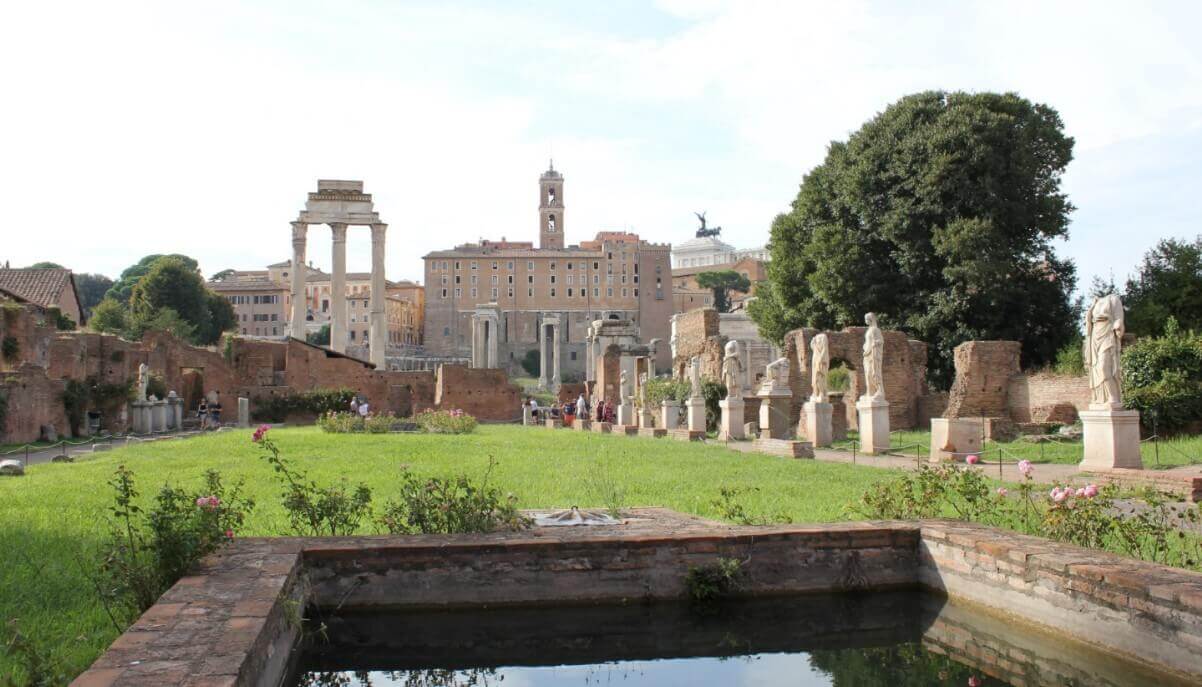 Vesta was goddess of the home and family, and the Temple of Vesta, Tivoli, was a structure honoring her. Amongst the greek inspired columns, the sacred fire of Vesta burned. It’s noted for its unique circular shape and can be found within the confines of the Roman Forum.

Read on to find out more about this important structure.

More about Temple of Vesta History

It is believed that the first structure honoring Vesta dated back to the 3rd century BCE. Apparently, it was modelled on a simple hut – circular in shape. This is said to mimic the original place the goddess Vesta was worshipped – the home.

The fire that was kept burning inside the original temple proved troublesome – the original construction materials were wood and straw. It was therefore rebuilt in the 3rd century AD with more durable materials.

Tending to the fire were 6 “priestesses” – the Vestal Virgins. These women, as you can guess, took a vow of celibacy during the 30 years they served the temple. One of the main jobs was to keep the fire alight – failure to do so was faced with harsh punishment.

In addition, any rumour of breaking the celibacy vows could result in death. The Romans believed if disasters happened to Rome, it was because of some misbehaviour by the priestesses. However, even though the risk of death was high, many remained in the priesthood due to the social benefits it afforded.

The Vesta Temple is about 14.8 metres in diameter and is formed of 20 columns. These massive columns reach over 10 metres high.

You can get a good idea of what inside the Temple of Vesta looked like from the floor plan. Luckily, there was plenty of evidence. Reliefs built into marble structures, as well as imprints on coins help us understand. On the floor plans, you can see the east facing door, and the columns surrounding the circular interior. Here, you can also see the steps leading up to the entrance.

Looking Inside of Temple of Vesta

Inside the Vesta Temple, you would have seen the fire burning in the centre. The ashes from the fire were removed and kept, then disposed of in the Tiber once a year. Also from the inside you would have been able to look up and see the hole in the roof. This was of course to let the smoke from the fire out. But, unfortunately, this actually acted as a sort of vent, and often caused dangerous fires.

Over the course of its lifetime, the Temple of Vesta has been restored and reconstructed. The largest of these reworks in ancient times was in 191AD, following yet another fire. Then, the Temple remained untouched until the middle of the 16th century, when it was dismantled. It’s beautiful marble pieces were taken to build other structures.

From 1877, archeologists excavated the site. In 1900 Giaccomo Boni led and published a study into the excavations. The details given – including floor plans and dimensions – were used to reconstruct some of the temple in 1931. You can visit these reconstructed parts today.

Here are 3 fun facts about this glorious temple.

The fire wasn’t the only thing in there

The temple was also home to an effigy of Roman Goddess Minerva (Greek goddess Athena). Originally thought to have come from Troy, the Romans linked Minerva to Athena. Not really sure why it was kept in Vesta’s temple. Not sure if she would have liked that..

The Temple of Vesta, Roman Forum, was looked after by the Vestal Virgins. They were like some sort of posh glamour squad in my head until I read up about them. Turns out they actually entered service as children, sometimes as young as 6! I wouldn’t leave my 6 year old in charge of the remote control, never mind a fire!

The House of the Vestal Virgins

It wasn’t all about fanning the fire. The Vestal Virgins got to spend their down time in the adjacent mansion. Beautiful ornaments, pools and statues adorned this space. However, they were probably too worried about getting buried alive if the fire went out to enjoy it.

Visit The temple of Vesta – Get Tickets

You will need to have tickets to the Roman Forum in order to check out the this place. Book them today, in combination with a Colosseum ticket. You can get fast track tickets here for as little as €20.

Temple of Vesta Location & Maps – How to get there

Take Metro line B to Colosseo. From Termini it is about a 5 minute journey. Or, take the bus. There are plenty of lines stopping at Piazza del Colosseo, including 40, 51, 60, 75, 81, 175 and 204. Check out this map below of the location of the Temple of Vesta within the Roman Forum.

Where is the Temple of Vesta located?

You can visit this stunning location as part of a trip to the Roman Forum. Find it near the Regia.

What was the Temple of Vesta used for?

The structure was used to house and protect the fire of the goddess Vesta. She symbolised Rome’s strength and prosperity.

When was the Temple of Vesta built?

A temple is first thought to have been constructed on the site as early as the 3rd century BCE. Over the years, fire destroyed it many times. Subsequently it had to be rebuilt on many occasions. Finally, in the third century AD it was rebuilt and stood tall until the 16th Century.

Who built the Temple of Vesta?

The wife of Septimius Severus is credited with having led the build of the new temple in the 3rd century AD.

How old is the Temple of Vesta?

A temple Has stood on the same spot since the 3rd century BCE.

How tall is the Temple of Vesta?

With columns standing at over 10 metres high, this was an imposing sight back in the day.

What is the Temple of Vesta?

A structure, build to honour the goddess Vesta and to house her holy fire.

What material was used in the Temple of Vesta?

The original structure was probably straw and other earthen materials. Later constructions added the glorious marble pillars. A reconstruction of part of these pillars can be seen today in the Roman Forum.

You’re now a top pro on the history of the Vesta Temple. Get on to our other pages right away to plan your trip to the Roman Forum and the Colosseum before you forget what you’ve learned!