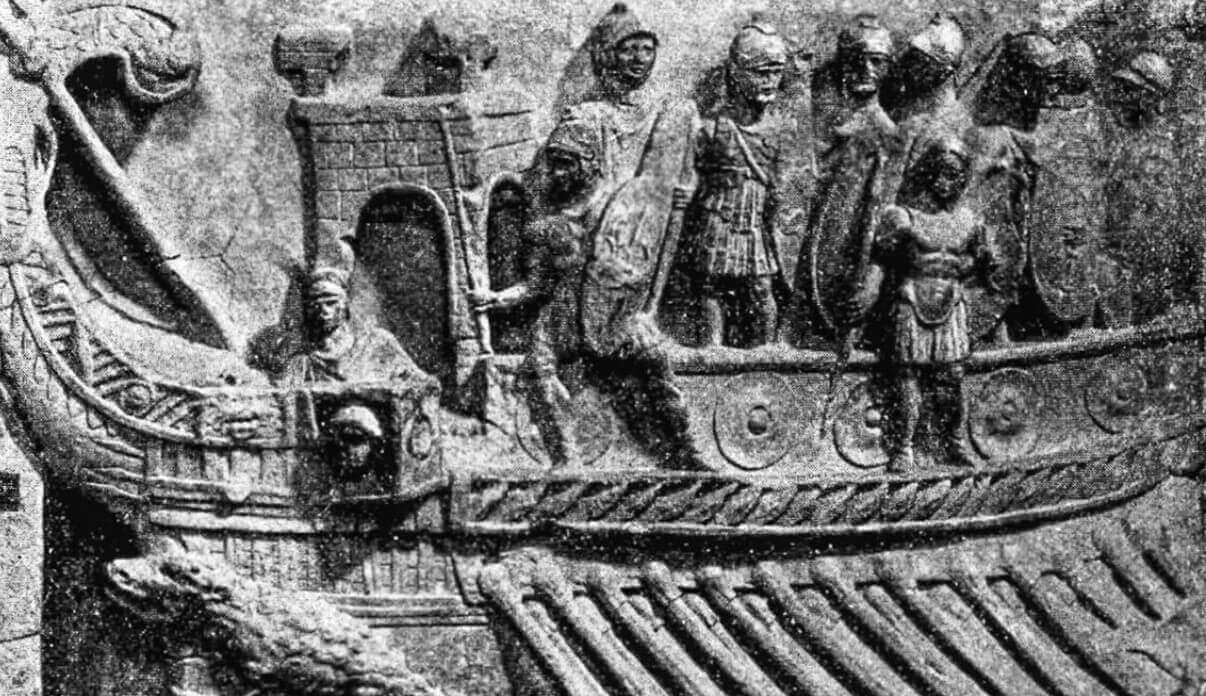 What on earth is a Naumachia? Never heard of it? Googling it now because you saw it on a brochure about Rome?

Well, we have the lowdown right here. Read on to learn the history of the sea battles…

What was a Naumachia?

The Naumachia (plural naumachiae) was a show sea battle that would take place as a form of entertainment for ancient Romans. Originating from the ancient Greek language, the word Naumachia also meant the theatre grounds for the show.

There are paintings that depict such Naumachiae happening in the Colosseum in Rome. However, it is a subject of ongoing debate amongst historians.

The history of Naumachia

It is believed that the first sea show – or Naumachia – was hosted by Julius Caesar, sometime around 46BC. A grand show to celebrate his military victories, Caesar had a massive basin dug on the banks of the Tiber River. Then, he got a whole bunch of prisoners to emulate a battle at sea.

Over 2000 men took part, plus the 4000 rowers that were needed to power the boats. Later on, Amphitheaters were thought to have been used instead of the basins. The shows are thought to have remained popular until around 250AD.

Frequency of the Naumachiae and their attraction

Because of the massive effort taken to get ready for the show – location, watering, construction of vessels, organisation – the Naumachiae happened infrequently. The biggest are rumoured to only have occurred 5 times in history. They were only used to celebrate massive victories.

Because they happened so rarely, they attracted HUGE attention. People came from all around to see, and it is recorded that some were trampled to death in the throng. Others camped out overnight in order to get a seat. A mini industry would set up around the lake or amphitheater. Bars, street vendors, and prostitutes would come to the area in order to capitalise on the event.

Theme of the Naumachia

It was popular to recreate previous battles or create new ones against the common enemy. Greek victories over the Persians, Corcyreans against the Corinthians. The first Naumachia – the one staged by Julius Caesar – was initiated to celebrate his victories in Egypt. They organised a fake battle between the Phoenicians and the Egyptians.

Facts about Gladiators in Naumachiae

The participants of the reconstructed battles were usually prisoners and convicts. So, they weren't really Roman Gladiators as such. Known as naumachiarii, they would have known there was a real risk of death by mutilation or drowning.

Generally, they were on death row anyway. Sometimes however, free men too participated. On occasion, it has been recorded that some men received pardons if they fought with real vigour.

The Rules of Sea battles Naumachia

There was a lot of organisation that went into a Naumachia. From creating the body of water or filling an amphitheatre, to sorting out spectators and combatants, there was a lot to do.

Once everything was ready, a horn would sound and the battle would commence. Because the participants were convicted criminals, guards and marines were stationed on rafts around the battle, in case one would try to get away.

Augustus hosted a Naumachia in 2BC, also by creating a basin on the Tiber. He used more men than Julius Caesar did in 46BC – 3000 combatants, plus the rowers. So huge was the event that it is said to have included more fighters than there would have been in a real live battle.

Check out these answers to some of our frequently asked questions…

How do you pronounce Naumachia?

It’s definitely a strange word, and one you’ll not likely have heard before. You pronounce it like this - No-may-kee-ia. To be honest though, we are not sure what situation you would be in to need to use this word in every day conversation!

Were people killed in a Naumachia?

Yes they were! It was usually fairly gruesome. The pretend-combatants were usually convicted convicts. So, they were likely sentenced to death anyway. So, why not use them for some sport before that? There are believed to be recorded cases of the combatants only “fighting” each other lightly so as not to hurt each other, and having to be goaded by the authorities to fight properly.

How did the Romans fill the Colosseum with water?

There is some conjecture amongst historians around whether Naumachia actually occurred within the Colosseum. The discovery of both pipes - for letting in the water- and drains for letting it out - leads many to believe it was possible. We for one wonder about the chambers below the colosseum - the ones that would have held animals for example. Were they flooded too?

Were there ship battles in the Colosseum?

Historians disagree as to whether there were ship battles in the Colosseum or not. We do know massive basins were dug on the banks of the Tiber for the battles. In theory it would have been possible to hold a Naumachia in the Colosseum. Some supporters of the theory point to the pipes discovered under the Colosseum as evidence. Titus is credited to having held a Naumachia within the walls of the famous amphitheater.

This expensive, complicated and gruesome form of entertainment was so extravagant that they only happened a handful of times over the centuries. People would literally climb on top of each other to get to one!

Now you’ve learned all about the Naumachia, get to planning the rest of your stay in Rome! We have all the resources you will need to sort out accommodation, attractions and even restaurants.