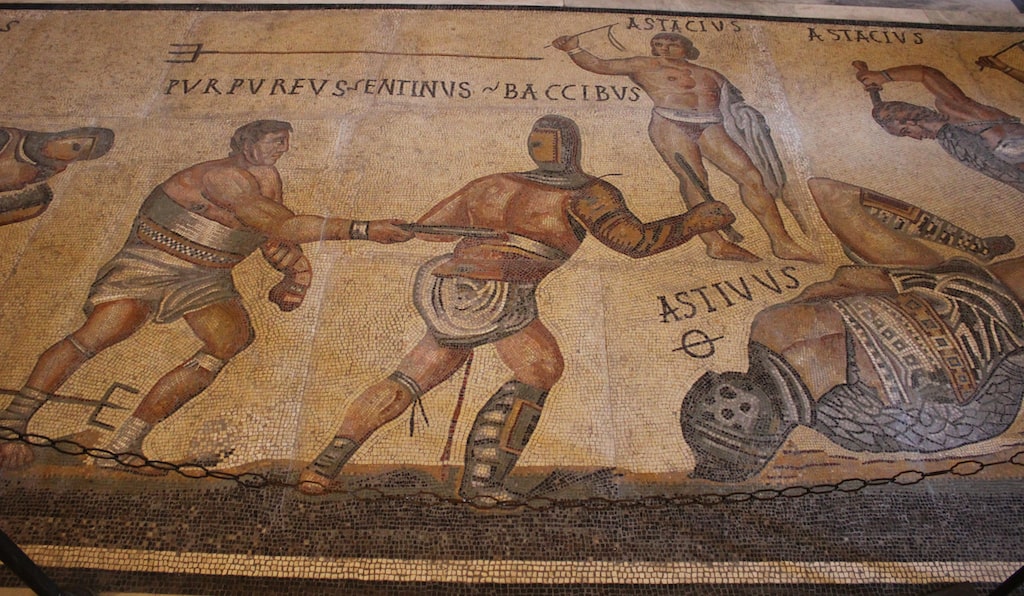 Gladiators in Colosseum, know the History of the Roman’s Games

Since Ben-Hur movie everybody loves a good story about gladiators in Colosseum. The origin of the gladiatorial games is still a matter of debate amongst historians. Many believe the concept is descended from the Etruscan custom of making human sacrifices to celebrate the death of a nobleman. Let's check the facts and learn more about this gladiator Colosseum topic.

When did gladiators start fighting in the Colosseum ?

When the Colosseum games started they were strictly connected to religion and magic, although later this sentiment was forgotten. The first record of a gladiatorial fight dates back to 264 BC, when the sons of Roman consul and military commander Brutus Pera initiated the spectacle in the honour of their father. During the III and II century BC the games became incredibly popular with the general Roman public.

The Romans held roughly 10 to 12 times a year and were paid for by the emperor. Games were used as a means to keep the poor and unemployed entertained and in favour of the Empire, in the hope they would not revolt.

Over time, the games became more and more spectacular and elaborate, with every emperor wanting to outdo the previous competition. As time went on the games involved more participants, happened more frequently and cost more

The last gladiatorial game happened in the Colosseum in AD 438 and the games were abolished by emperor Valentinian III. The decline of the games came after the adoption of Christianity as the state church of the Roman Empire, although beast hunts continued for centuries after.

How the Roman Gladiator Colosseum games were organized?

Events and games at the Colosseum were planned down to the tiniest details as they weren’t just from the general public but politicians and government officials were usually in the crowd. At the start of the Colosseum’s events, the Empire depended on the success of the games so they were carefully put together.

The Romans loved to be surprised so novelty was valued by the crowd. You can walk in the footsteps of the gladiators when visiting Rome if you do a Colosseum tour with arena floor access.

The order of events on the opening day of a festival started with parades and processions. After the procession of Vestal Virgins , the most important priests, soldiers, politicians and senators would enter. Then the Emperor would make his grand entrance. Religious ceremonies and sacrifices would take place before the games began.

The display and hunt of animals would happen at the start of the day with the Emperor often joining in, using a bow and arrow from the safety of his Imperial box. The lightly armed gladiators fought in the middle of the day, that was followed by horse racing and then by andabateas, hapless criminals who provided comic relief. At noon the executions were scheduled and the gladiatorial combats would happen in the late afternoon.

The games started as a diversion but as the years went on the Roman taste became more jaded and lewd, so the acts had to become more sexualized and lewder.

How to become a gladiator in ancient Rome ? From a punishment

The Roman gladiators were usually slaves, criminals or prisoners of war. Some of the gladiators were allowed to fight for their freedom but many were criminals who were sentenced to death, thrown into the arena unnamed and unarmed to serve their sentence. Some people actually volunteered to be gladiators so they could honour their family name or wanted fame and glory.

Aristocrats who had become bankrupt was often forced to earn a living by the sword. For example, Sempronius, a descendant of the Gracchi clan was forced into the arena. Women were outlawed until 200 CE, when Septimius Severus permitted them to fight in the arena.

How did roman gladiators train ? A learning process

Gladiators who later fought at the Colosseum were sent to a special school that trained them to fight. Agents would scout the Empire for potential gladiators, especially when matches became a regular occurrence and they needed to fill the training schools. The school’s conditions were not much better than the prisons but they offered better food and medical attention.

Some gladiatorial battles included animals such as bears, rhinos, tigers, giraffes and elephants. Animals were often unfed so they would be hungrier and more violent towards the gladiators, who were called venationes (wild beast hunts). One a rare occasion the animals were allowed to maul and eat a live human, who was tied to a stake.

Did roman gladiators fight to the death ? The myth

They didn’t always fight to the death. This is a Hollywood myth, most colosseum gladiator fights were operated under strict rules and regulations. A referee oversaw the action and would have stopped the fight if they saw that one of the participants was seriously wounded. One in five, or even one in ten, participants would be left dead by the gladiatorial battle.

The famous thumbs down gesture probably didn’t mean death. Some historians think the signal for death was actually thumbs up, while a closed fist with two fingers extended or a thumb down was a signal for mercy.

There was a trade union for gladiators. They created unions with their own elected leaders who would ensure a fallen comrade received a proper funeral and grave inscription honouring his gladiatorial achievements. They also fought for the family of the deceased to receive monetary compensation.

Why did roman gladiator Colosseum fight ?

Several Roman emperors participated in staged gladiatorial bouts. Several rulers, including Titus, Caligua and Hadrian, fought in the arena although under high controlled conditions. These rulers wanted to be popular with the crowd so they would kill animals and compete against inexperienced fighters, as to gain the praise of the general public.

Gladiators were the celebrities of their day. Now they have been dismissed as brutes and criminals, but in fact gladiators were celebrities with the low classes. Their portraits would have graced the walls, children would make figures out of clay that looked their favourite gladiators and women would fantasize about marrying a gladiator. This Roman Gladiator fact is backed up by graffiti in Pompeii, that describes a fighter as a “The delight of all the girls.”

Roman gladiator, especially Colosseum gladiator, sweat and blood were thought to be an aphrodisiac and was put into cosmetics, facial creams and jewellery was dipped into it.

What kind of weapons did gladiators use ?

The term gladiator comes from the Latin word for gladiatories, this is the short sword they would often use in the arena, although they did use many other weapons.

Gladiators would wear elaborate armours and helmets, that were embossed with decorative motifs and peacock crests. The type of armour and the type of weapon they were given would depend on their class.

What animals did gladiators fight in the Colosseum ?

Where did gladiators fight before the Colosseum ?

Fights were held in the Circus Maximus, or sometimes in the forum.

Why did the gladiators fight in the Colosseum ?

There are numerous reasons. Gladiators were gaining the praise of the general public. Actually, gladiators were celebrities and almost every woman would fantasize about marrying a gladiator.

How many gladiators died in the Colosseum ?

According to experts, around 400,000 gladiators were killed.

What games were played in the Colosseum ?

It all started with parades. Then there were religious ceremonies, sacrifices, animal hunting, gladiator fights, horse races and executions. These are just some of the 'games'.

Was Gladiator filmed in the Colosseum ?

Not really. The most of the movie was filmed in England, Morocco and Malta.

Roman gladiator Colosseum games were an opportunity for the rich aristocrats to display the wealth and power of the Empire, mark visits from important officials, celebrate birthdays or to simply distract the common people away from economic and political issues.

To appeal to the Roman’s needs the games were bloody and the fascination came from life and death contests. Now millions of popular still flock to the Colosseum, now a little more desolate, to witness the marvel of Roman architecture and understand how our historical predecessor spent their free time.