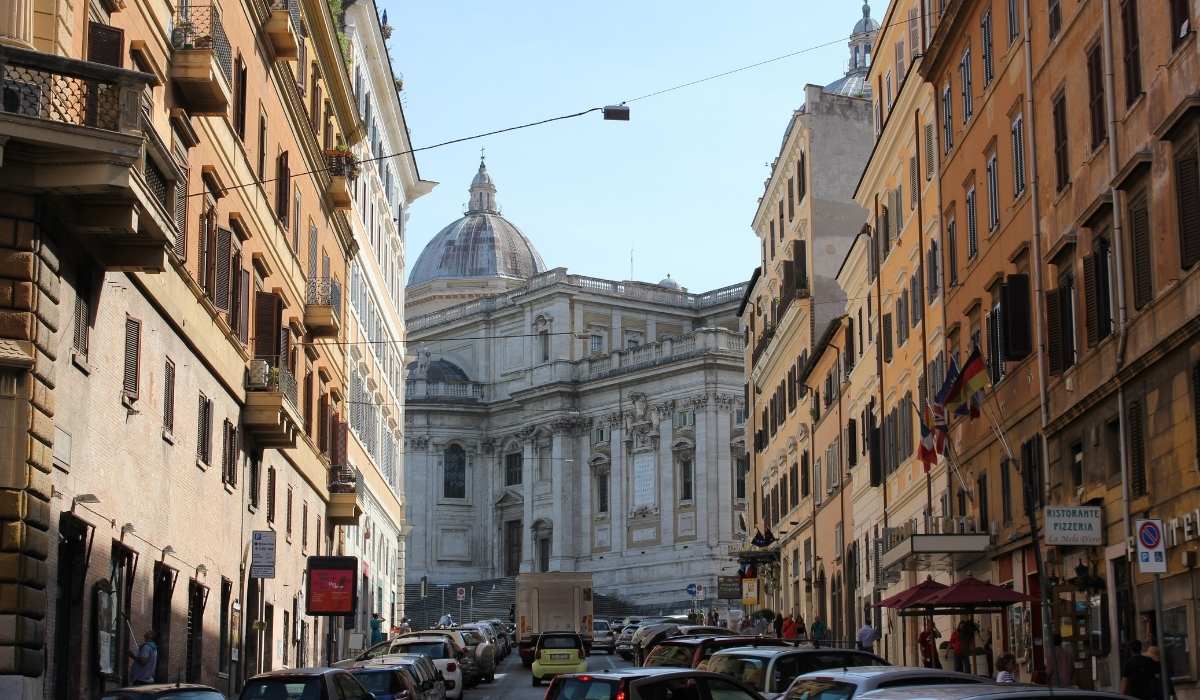 The Esquiline Hill in Rome – which itself contains three little peaks – the Cispian, the Oppian and the Fagutal – had originally been a poor area, and contained the cemetery for those who could not afford a proper burial.

The Esquiline hill tombs or necropolis were in use until at least the first century AD. Under the reign of Augustus however it began to be gentrified, and became the site of a beautiful Hellenistic Persian garden. Let’s find out more about this Esquiline Hill today.

The History Of Esquiline Hill in Rome Italy

Emperor Nero had a pretty sweet palace over on the Palatine Hill. Unfortunately, like much of Rome, it was destroyed in the great fire of Rome in 64AD.

He went ahead to order the building of his Golden Palace – the Domus Aurea – on the Esquiline Hill in Rome. Later on, in 104 AD, Emperor Trajan built over some of the palace with the Trajan Baths.

In more recent times, construction on the hill has uncovered a rich wealth of historical treasures. The Capitoline Hill on the Seven Hills of Rome may be more famous, but the Esquiline Hill is still worth a look.

Esquiline Hill Today: What to Expect?

The main train station is here – Termini – and there are some poorer areas of this part of town. The Basilica on Rome’s Esquiline Hill is the Santa Maria Maggiore, which is surely a stunning place to visit.

The museum of Ancient Art – the Palazzo Massimo – is also located here – as are the remains of Nero’s Golden Palace and the Trajan Baths.

Tip – Don’t forget to wander around the Monti neighbourhood too – it’s a charming place with old streets, and was a working-class area. This is one of the best places in Rome in which to pick up some international food.

The Santa Maria Basilica is an important attraction within Rome. The church is often referred to as Our Lady Of The Snows. That’s because legend has it that its location on the Esquiline Hill was selected by a couple who were looking to donate their inheritance.

One night – in August – it snowed right at the top of Esquiline Hill, and the couple decided to proceed to dedicate church there. The Santa Maria Basilica is renowned for its beautiful mosaics and frescoes.

Check out these three Esquiline Hill facts that your guide might not have told you about:

What You Can Visit Near Esquiline Hill

In a city of seven hills, the Esquiline Hill is not one that disappoints for things to do.

Whilst its attractions may not be as visible to the first-time visitor – (Colosseum, Roman Forum and Vatican City Tours usually make up a first visit) – it certainly shouldn’t be avoided.

Here are some of the top things to do on the Esquiline Hill:

Luckily you don’t need to buy any tickets to wander around the Esquiline Hill!

Taking a walk through the streets will sure get you a flavour for the area. You can see the Trajan Baths for example as you walk around the Parco del Collo Opio.

However, if you want to enter some of the paid for attractions you will need to fork out for tickets.

The Domus Aurea can only be accessed with a private tour. Tickets cost just under €20, and access times are restricted to three sessions a day on a Friday, Saturday and Sunday.

Tickets cost €8 if you just want to enter one of the art museums associated with the National Roman Museums. Otherwise, you can pay €12 and access all four of their museums.

Check out this Esquiline Hill map so you can get your bearings. You can take a tram from the Termini Station which will take you to the Farini stop on the hill.

3 Affordable Hotels Near the Esquiline Hill

Let’s take a look at some of the cool hotels near the Esquiline Hill!

This is a really good budget-friendly option. The spacious rooms, clean decor and the amazing location bely the price – a double here costs from just €90!

This cool design hotel boasts a roof terrace right in the heart of the action. The breakfast served here gets the best reviews, and in the summer you can enjoy it outside. Rooms start at around €170 a night for a double.

This boutique hotel is located in a traditional Roman townhouse and right in the middle of all the best things to see in Rome. You can pick up a double with breakfast in this cute place for just around €120.

Here are the top questions we receive about the Esquiline Hill in Rome.

How many hills was Rome built on?

Rome is famous for being built on Seven Hills.

Which city is known as the city of seven hills?

Rome is known as the city of the seven hills.

How high is Esquiline hill in Rome?

If you have time to spare when in Rome it is for sure a good idea to check out the Esquilne Hill and it’s cool and historical attractions!