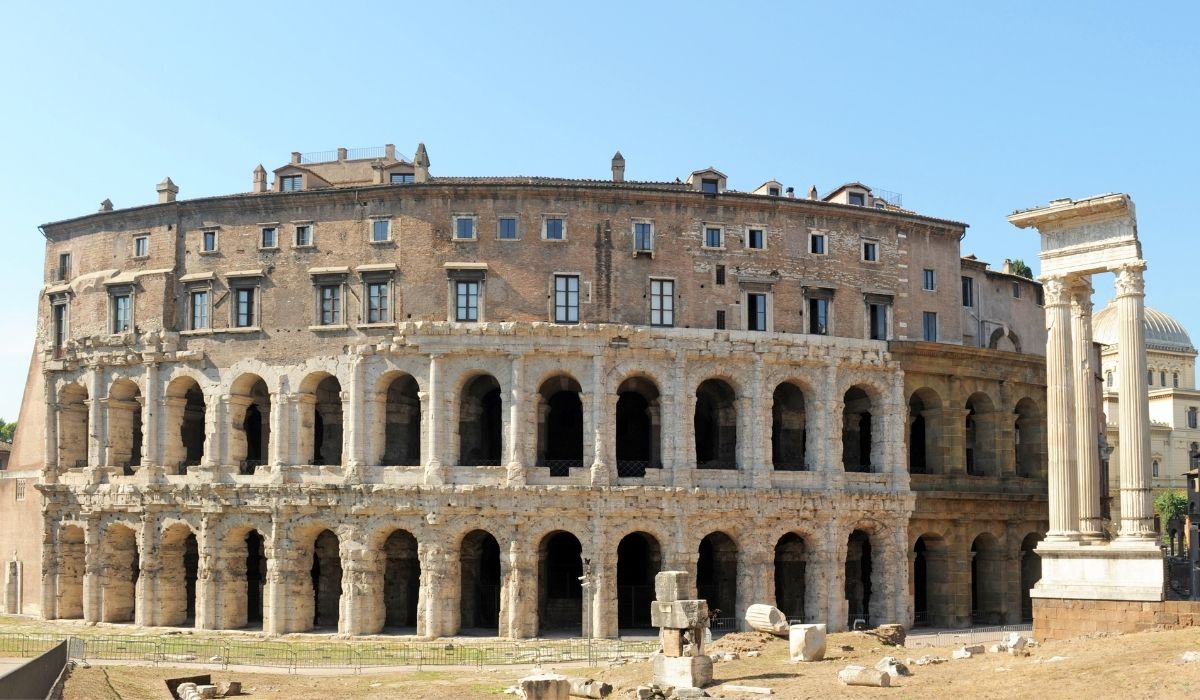 Theatre of Marcellus: The History Behind Teatro di Marcello

The Theatre of Marcellus – as it is known in Italian – is a site that can be visited in Rome. The brainchild of Julius Caesar, it was completed and inaugurated by Augustus in 12BC who named it after his nephew Marcellus.

Marcellus was the rightful successor of Augustus, but he had died unexpectedly a decade earlier. The theater was a large open air event venue where locals could attend plays and other entertainment amongst a crowd of up to 20000 people.

Known to have inspired several other similar constructions, this big hitting theatre was a forerunner to the Colosseum.

Let’s check it out together.

Here are just a few little Theater of Marcellus facts to help you get a flavor for the great Roma Teatro Marcello!

What Was The Theatre Of Marcellus Made Of?

Like many Roman constructions, the major part of the Theater of Marcellus Rome is made of Tuff. This is a stone created by several layers of hardened volcanic ash.

The compacted nature of the stone means that it is extremely durable. That, and the fact that the Roman theater of Marcellus has been in almost continuous use has contributed to its preservation.

Who Designed And Built This Monument?

The Theatre of Marcellus Rome was the concept of Julius Caesar. After finally beating his rival Pompey for control of the city of Rome, he wanted to design a huge symbol of power and authority.

Since that guy Pompey already had a theater, Julius Caesar wanted a bigger – and better one. Unfortunately, he got bumped off before the project could really get started.

Emperor Augustus picked up the construction and paid privately to have it completed. He dedicated it to his nephew Marcellus who had died in 23BC.

All The Details About Theatre Of Marcellus Floor Plan

If you take a look at the theater of Marcellus Plan here, you will perhaps notice it looks a little similar.

That’s because some elements of the Colosseum were influenced by its style and design.

Standing at 33m high, the theater was a huge entertainment space with enough room for over 17000 – some say 20000 – spectators.

Theatre Of Marcellus Facts Only Romans Know About

Can You Visit The Theater Of Marcellus Today?

The good news is that the Theater of Marcellus is accessible to this day. You can still see the outline of the original structure. On the upper levels you will find the red brick additions added in later years.

The first suggestion we have when visiting the Theatre of Marcellus is to head up the Capitoline Hill. From there, you will get an excellent view of the structure amongst the buildings of Rome!

Next, head on down to get a good view of the outside as you walk around the area.

Tip – You cannot access the interior, but you should definitely make a point when you are in the area to stop by.

Should You Get Theatre Of Marcellus Tickets?

No, you don’t need any tickets to see the theater.

However, you might want to consider getting tickets for an overall tour of the area including the Colosseum and Roman Forum. In addition, during the summer the city often puts on little concerts in the theater.

It is run under the Estate Romana program from June through to October.

3 Nicest Hotels Near to the Theater of Marcellus

The area around the Theater of Marcellus has plenty of hotels!

These three great ones are all located less than 300 meters from the theater.

The Otivm Hotel gets a rating of 9 on tripadvisor. With a stunning rooftop terrace with amazing views and gorgeous decor, it is easy to see why.

The little Pension Reginella is pretty special too Located in a beautifully refurbished old townhouse with exposed wooden beams, it is a charming location.

Where Is The Theater Of Marcellus Located?

You will find the Theatre of Marcellus in the heart of the Jewish Ghetto, not far from the banks of the River Tiber. The official address is Via Del Teatro di Marcello. Take a quick look at the map here.

How to Get to the Theater of Marcellus

Who built the Theatre of Marcellus?

The theater was started by Jusius Caesar and finished by Augustus.

Why was the Theater of Marcellus built?

Julius Caesar wanted to build a huge theater to compete with his rival Pompey.

What was the Theatre of Marcellus used for?

The theater was used for plays and other entertainment, and can still be visited today!

This mini Colosseum is definitely worth a quick look when visiting Rome. Now, check out this cool tour of Rome which will hit off some other high points on your itinerary!

Make sure to cover off the Roman Forum, the Colosseum and perhaps even the Vatican City. We have all the tips and hints you need to make your trip one of a lifetime.