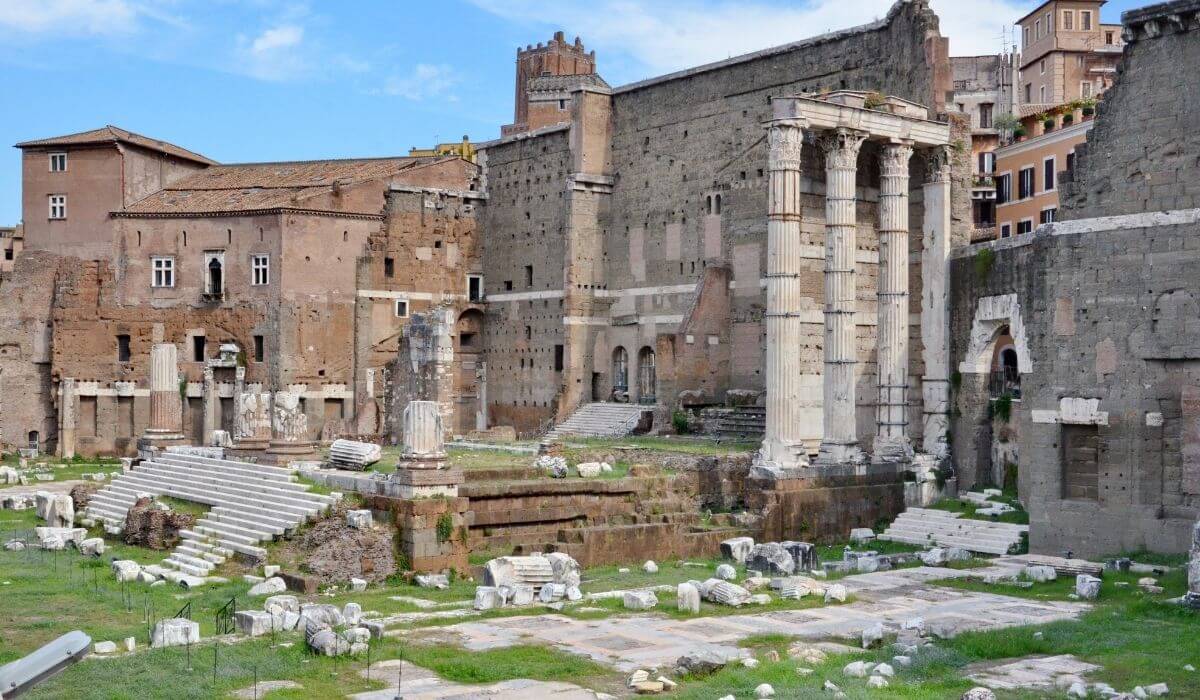 Forum of Augustus: Everything About Fascinating Ancient Forum

The ancient Roman Forum of Augustus was one of Rome’s imperial fora. Mostly built on parts of Augustus’ own land, the forum housed the Temple of Mars Ultor and various statues.

It was also a place that held legal proceedings, especially as the Roman Forum became more and more crowded. Notable for its vast collection of sculptures and statues, the forum was a show and display of the Augustan military strength.

What Is the Forum of Augustus?

The Forum of Augustus plan shows an impressive area, designed to promote the Augustan ideal. The flow of the Forum was designed to demonstrate the history of Rome.

It began with “just wars” overseen by Mars the Avenger through to periods of peace – symbolized by the god Venus who eventually disarms Mars. The very initial concept for the Augustus forum Rome came from Augustus himself.

As he went into the battle of the Philippi in 42 AD as retaliation for the death of Julius Caesar he vowed to construct a temple. It would be dedicated to Mars Ultor – Mars the Avenger.

The History of Forum of Augustus

With this backstory, let’s talk about the history of the temple and the Forum itself. The victory in the battle of the Philippi came at just the right time.

Not only was a monument to Mars Ultor to be built, there was also a need to create a new Forum. The Roman Forum was becoming overloaded, and increasing legal proceedings in the Empire meant more official spaces were required. Construction was completed in 46 BC.

The chosen location was beside the Forum of Caesar, and Augustus had to buy a bunch of buildings to acquire enough space for the construction. The complex is around 120m2 and surrounds an impressive square of 70 x 50 meters.

The Temple of Mars was set on the eastern side, and courthouses and other administrative buildings made up the rest. A huge hall with a large statue of Augustus was also constructed.

Finally, a huge wall standing 33 meters high was built to protect the forum from an area of town that kept catching fire!

Why Is the Forum of Augustus Important?

The forum was a show of Augustan strength and power. In addition to the huge statue of himself, Augustus brought or had constructed a large number of statues and busts of others.

Many of these were of former powerful military men or from ruling families and were placed in the Augustus Forum Rome. This was an important play – it tied Augustus to the prestigious men of yore, emphasizing his roots that were traced back through ancient kings.

This consolidated his reigning power and gave him much needed legitimacy during his rule.

Born in 63 BC as Octavian, Augustus is known as Rome’s first emperor – as he founded the Roman Empire. Known for his military and political ruling strength, his rule brought a period of relative peace and stability to the entire region within his control.

Great nephew of Julius Caesar, Augustus inherited his estate on his death – including his grand title. After avenging Caesar’s death at battle, Augustus consolidated power from his rivals, increased his political strength, and began to expand the empire.

His achievements were numerous – he began to build roads, established friendly “buffer states” on the empire’s fringes and even started the fire brigade.

This place is unfortunately mostly ruined. Parts of the columns that supported the Temple of Mars remain, as does most of the podium base.

Part of the huge protecting wall can also be seen. You will pass by the Forum on the way to the Colosseum, so make sure you stop and take a look.

Tip – Go back in the evening for the forum of Augustus light show. This is a spectacular evening projection onto the ruins which show the Forum back in its heyday.

This place was surely an impressive site, and it is perhaps a shame that it is hard to visualize its impressive original state.

Perhaps it will be restored at some point in the future by the city of Rome. In the meantime, check out this impressive reconstruction video to get a flavor for its former grandeur.

Statues Within the Forum of Augustus

It is thought that there were over 100 statues in the Roman Forum. Many were made in bronze and marble and included military men as well as kings.

Adding to this were the elaborate statues of Mars and Venus that were located in the temple. Finally, right in the center of the Forum, there was a huge statue of Augustus in his military gear.

You can see some of the statues in the Museum of the Imperial Fora which is nearby.

Let’s Get Forum of Augustus Tickets

The most excellent part about the Forum is you don’t need any tickets to see it. You can simply pass it by on your way to the Colosseum or Roman Forum.

But there is one thing you do need a ticket for – the spectacular Forum of Augustus evening show – a projection of the original state of the Forum onto the ruins. It is definitely worth attending, and tickets include an audio guide.

The Forum of Augustus light show tickets are available to purchase online – note they are only available June through November, and cost 15euros per person.

Get your bearings here and check out the location of the greatest statues at the Augustus Forum Rome here.

How to Get There

This amazing place can be reached by taking the metro on line B to Colosseo station. The Via dei Fori Imperiali can be found about a 5 minute walk from the station.

There are plenty of great hotels available in and around the Colosseum. For those on a budget, the Soggiorno Downtown is a great option.

Receiving fabulous reviews and offering a great price of only around €80 per double per night, you’ll have plenty of cash left over. If you are looking to splash out, then the Hotel Vilon offers opulence and style – at a price that may make your eyes water.

Get a double room for around €500 per night.

How was the forum of Augustus funded?

The Forum and the Arch of Augustus were funded by Augustus from the spoils of war.

What was the forum of Augustus used for?

It was not only a show of military strength and Augustan power, it also became a place at which to host political meetings.

When was the forum of Augustus built?

Who built the forum of Augustus?

It was completed by Emperor Augustus.

Why did Augustus build the forum of Augustus?

Augustus built the forum to celebrate victory in battle.

This little known Forum has a lot going on! Make sure you stop by on your trip to the Colosseum.

And if you need any tickets or information for the Colosseum make sure to stop by our detailed guide to the Colosseum and Roman Forum.