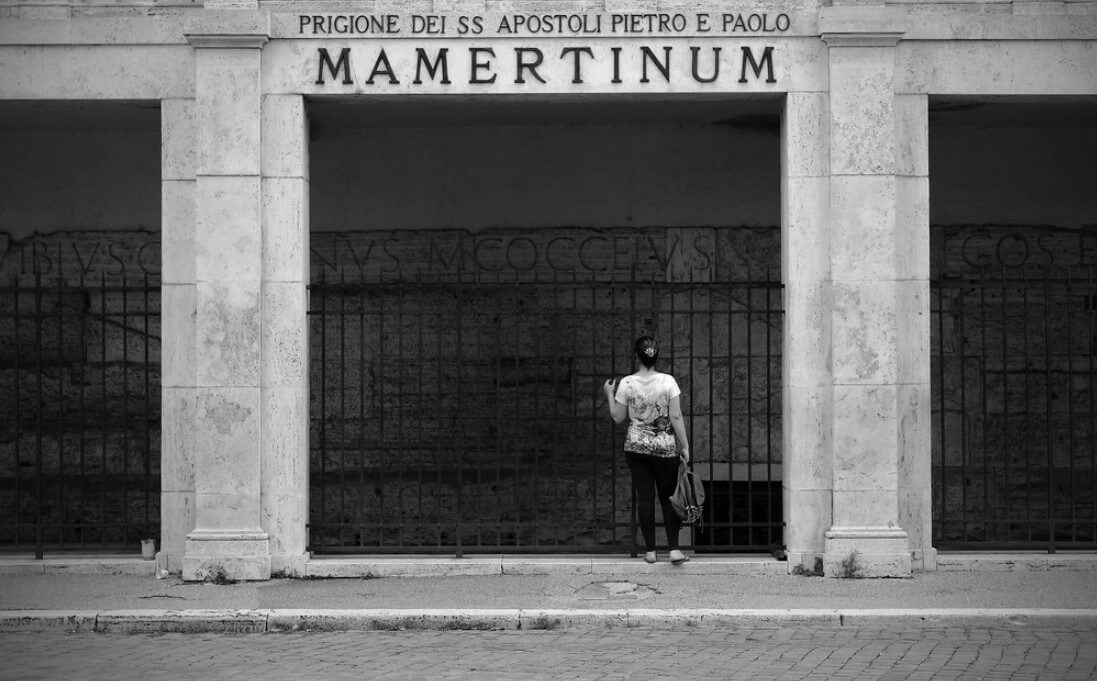 Built – it is believed – in the 7th century BC, the Mamertine was located on the Capitoline Hill and served as a prison for “important” or “high profile” prisoners. It was known back then as the Tullianum, and was perhaps named after one of the Roman kings of that name.

Others state it takes the name from the cistern that is found in its base. It became known as the Mamertine much later on, and it is this name that is usually used today on in guidebooks and on Mamertine Prison tours.

The prison is found underneath the San Giuseppe dei Falegnami church.

One of the most striking features are the images of the upside down cross. This is not a detriment to Christianity, rather a religious reference to St Peter, who was crucified upside-down.

Christian pilgrims also had an altar installed there. The architecture and construction is interesting too. There are two cells to be found in the Mamertine Prison Rome, one on top of the other.

Of course, being underground, the cells are pretty dark and dank. Once can imagine it would have been pretty grim to be held there.

Aside from St Peter, there is a long list of other famous people and leaders who were imprisoned in the Tullianum, usually prior to their deaths.

One of the most important parts of the Mamertine Prison history is the fact that St Peter and St Paul were known to have been held there.

Little is known as to how and why St Peter came to be imprisoned there, but there is a detailed legend of St Paul’s experience.

In July 64AD, a fire spread through Rome. However, the Christian districts remained largely unscathed. Rumours were swirling at the time that Emperor Nero had orchestrated the inferno so that he could upgrade the city to his own architectural preferences.

Trying to save his name, Nero accused the Christians, and blame fell to Paul. There is reference to this event in the Bible, Acts 24.5

“We have found this man to be a troublemaker who is constantly stirring up riots among the Jews all over the world. He is a ringleader of the cult known as the Nazarenes.”

Paul was subsequently arrested and thrown into the horrible lower cell in the Mamertine Prison to await execution. It is believed he was executed in 68 AD.

How to get Mamertine Prison Tickets

Tickets cost about €10 and should be booked in advance (available online here). Children under 6 are free.

You can also book at the ticket counter at the associated museum on site.

The price includes tour in audiobook form in English, Italian and Spanish.

You can also opt for the entrance to the Prison with a video guide (ticket here). There is also a good deal with a combo ticket to join your Mamertine tour with the Colosseum, Roman Forum & Palatine Hill (check availabilities here).

The Mamertine Prison is located at Clivo Argentario, 1.

Take Metro Line B to the Colosseo stop. From termini, this option takes only 3 minutes.

You will not need much time to explore here, as the premises are small. But around the prison there are many other sights to see. Of course, the marvellous Capitolini Museums are within a stone’s throw of the Mamertine Prison and are a day out in themselves.

Who built the Mamertine prison?

Although legend has it that the spring inside the Mamertine Prison miraculously appeared due to St Peter or St Paul’s presence, this is probably not true. The spring existed prior to the prison. It is understood that the structure began to be built in around 640 BC, by and is understood to have been constructed in 640–616 BC, by Ancus Marcius, the fourth King of Rome. It was then later converted to a prison.

When was Mamertine Prison built?

It is understood that the structure began to be built in around 640 BC, by and is understood to have been constructed in 640–616 BC, by Ancus Marcius, the fourth King of Rome. It was then later converted to a prison.

Who was held prisoner in Mamertine prison?

The prison was known as a place to house more famous prisoners. Alongside a long list of kings and rulers who fell out of favour, St Paul and St Peter are rumoured to have been held here. It is claimed that some of the Biblical books were written within the cells.

Was Paul in the Mamertine prison?

Yes, it is rumoured that St Paul of Tarsus was indeed held in the Mamertine Prison. This was prior to his execution by Emperor Nero in 68 AD.

This little prison often gets poor reviews – largely due to its size and the fact that 10 euros entry fee is perceived to be too much. However, if you understand the full back story to these cells, and the fact that St Peter was said to have been here…

Then we think the 10 euros for this slice of ancient and Biblical history is worth it, if you are interested in this area. If you want to check it out, get your tickets here and then head on over to the Capitolini  Museums after.