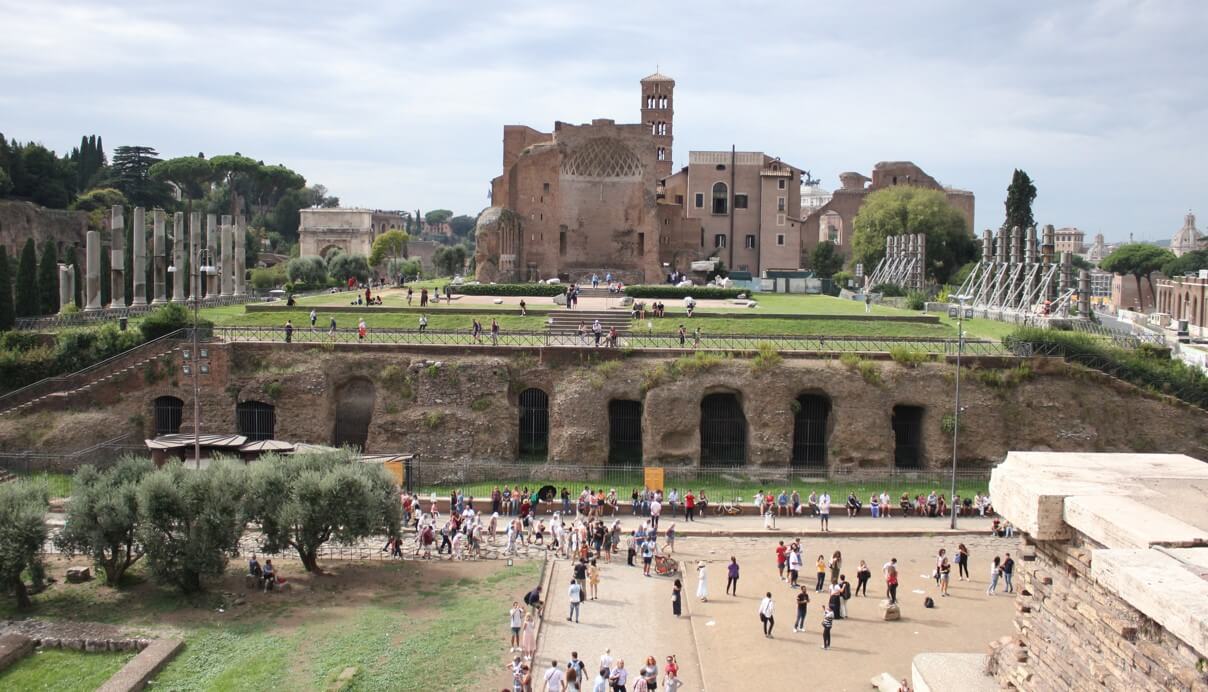 In the first century, the Emperor Domitian set up the biggest gladiator school and named it the Ludus Magnus. It served as a welcome centre for gladiators from all over the empire who would receive training as well as accommodation.

Here, the gladiators would swot up on all the skills needed in preparation for the games in the Colosseum.

What is Ludus Magnus and it’s background? Well, let’s explain. Towards the end of the first century, Emperor Domitian went on a gladiator barracks Rome binge!

Aside from the Ludus Magnus Roma, he also spent his time setting up three more gladiator training schools in Rome – the Matutinus, the Dacian and the Gallic.

Several other emperors modified the structure as time went on, but by the 5th century the ancient Roman Gladiator School Ludus Magnus began to go into decline.

This was a direct consequence of a ban that hit the Ludus Gladiator Games at around this time. By the 6th century the site became abandoned and was eventually used as a cemetery. It was not until the late 1930’s that the remains were discovered.

What does Ludus Magnus mean? Well, “Ludus” has several meanings in Latin, but it is generally associated with sports, games, and playing. Ludus, therefore, became a name used for an ancient Roman gladiator school – Ludus Magnus being one such example.

Magnus means “great” – for example, the Emperor Flavius Magnus would be translated as “Flavius the Great”. So, from there we can deduce that it means “Great/Big Gladiator School” – although it doesn’t have quite the same ring to it in English!

The entrance to the Ludus Magnus Gladiator School is believed to have been on the Via Labicana, accessed below street level by a series of steps. An entrance hall, decorated with fountains and columns would have welcomed visitors or trainees.

Inside, there was an arena surrounded by steps (much like in the style of the colosseum). The length of the training area was about 63m long. Aside from the spectator area – known as a cavea – there was also a system of tunnels in the training ground that stored gear and equipment.

The tunnels were not only used for storage – there was also a tunnel that ran from the training school in the south west corner right through to the Colosseum. It was along this tunnel that the gladiators would have come before they would begin their terrifying fight in the Colosseum.

How Were Gladiators Trained?

Originally, gladiators would have been prisoners and slaves. As time went on, successful gladiators began to amass prestige, and some free men volunteered to fight. The training was rigorous, and the men were chained in their cells, only allowed out to eat and practice.

Even the volunteer “free men” had to adhere to the rules. The trainees would learn how to fight whilst carrying armour, and were also educated on entertaining the crowd. Find out for yourself with a gladiator training session such as this one here.

Can You Visit Ludus Magnus in Rome?

Yes of course. Better still, it is visible from the street, just across the road from the Colosseum, so you don't need a ticket!

Until the full scope of the Ludus Magnus underground is excavated, you will need to fill up your time in the Colosseum area with a few more attractions. Of course, you’ll absolutely need to see the Colosseum.

We’d recommend skip the line tickets if travelling in the peak season. You may also want to pick up one of Rome’s City Passes so that you can combine a few attractions together.

These often include hop on hop off bus tours and even access to museums such as the Borghese Gallery.

We already mentioned the Hotel Palazzo Manfredi – because it is simply stunning. With rooms starting at over €500 a night though it is only one for those looking to splurge on a special occasion. The stunning views from not only the roof terrace but also some of the suites make it worthwhile though!

If you’d rather keep your hard-earned cash for sightseeing or eating out, then never fear. The B&B First Floor offers double rooms from a more modest €160 per night without sacrificing on the stunning views of the Ludus Magnus. The interior is sleek, modern and just what is needed after a long day of sightseeing in Rome.

When was the Ludus Magnus built?

The original place was built by emperor Domitian in the first century and added to in bits and pieces by subsequent emperors.

Where did gladiators sleep in Ludus Magnus?

Gladiators - whether prisoners, freemen or slaves - would sleep together in cells, shackled.

How did Roman gladiators train?

Roman gladiators would train in a training school such as the Ludus Magnus where they would learn the art of combat and how to handle armour.

What is a gladiator school called in ancient Rome?

A gladiator school was known as a Ludus.

Plan a stop off at the Ludus Magnus on your way to the Colosseum. And as you plan your trip, think about what other top attractions you want to see in Rome.