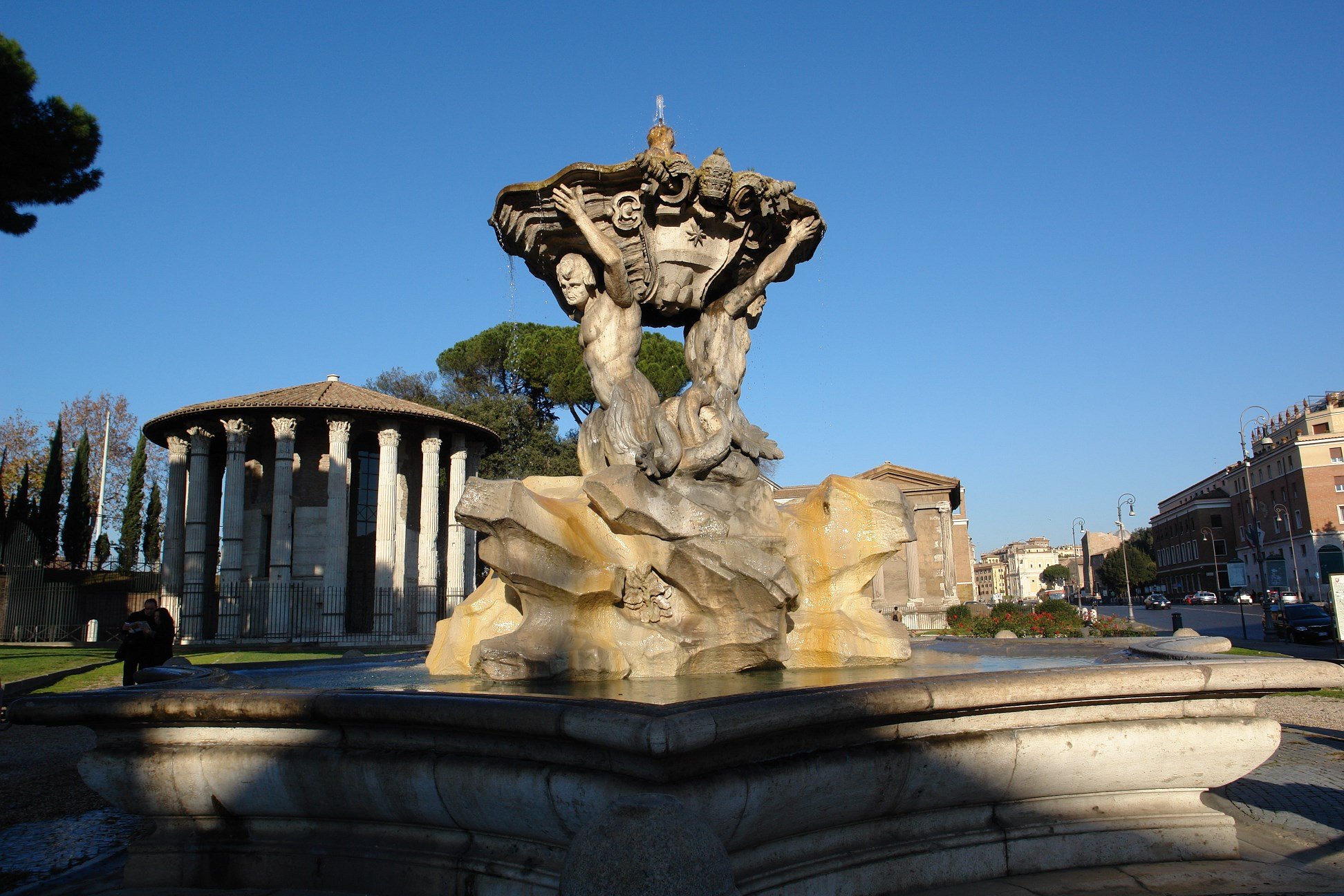 The Forum Boarium is an area of Rome where you can see pieces of Roman architecture still standing amidst the modern day city.

The Forum is an affordable sightseeing location, and with these facts you’ll be able to plan the perfect trip.

What is the Forum Boarium ?

The Forum Boarium is actually Rome’s oldest Forum, located on the River Tiber. It used to be home to the biggest meat, fish and cattle market, of Ancient Rome.

After the fall of the Roman Empire though, the area was just a swamp until the 6th century, when the Etruscan Kings reclaimed the land and built a port (Portus Tibernus). The port meant that the Forum once again became a busy and important area.

Throughout history, the Forum has suffered floods (thanks to its riverside location) and fires (different people attempted to burn it down). But amazingly, the Forum is still an area of living history.

The Forum is home to two important temples, the Temple of Hercules Victor and of Portunus. These temples both date back to the BC era, but because they were later converted and maintained as Christian churches they’re actually in great condition and definitely worth visiting.

How to get to the Forum Boarium ?

The Forum Boarium is located on the Piazza Bocca della Veritá, and it can easily be reached by bus.

If you’ll use the public transportation to get around Rome, we’ll recommend to check if a 72-hours travel card would be worth it for you.

What is there to see at the Forum Boarium ?

Hercules and Portunus Temples of the Forum Boarium

Boarium is a small area but there’s quite a lot to see there. Most people who visit the Forum do so to see the two temples. The Temple of Hercules Victor and the Temple of Portunus. But when was the Forum Boarium built ?

The Temple of Hercules Victor dates back to the end of the second century BC. But the reason it’s in such good condition is that in later centuries it was converted into a Christian church and maintained over hundreds of years. With its 20 Corinthian columns, it is definitely an impressive site to behold given its age.

The Temple of Portunus is just a century newer than the Temple Hercules of the Forum Boarium, and has had much the same history and is just as impressive. This temple is rectangular rather than circle, and has a single flight of stairs leading up to the entrance.

Opposite the Temple of Portunus is the House of Crescenzi, which is closed to the public but still possible to view from outside. The house dates back to the 10th century and was built as a traffic control building.

As well as the two main temples, there are several other significant pieces of architecture. The Arch of Janus is the only ancient Roman four-sided arch left that’s been maintained and preserved. It was initially built in the 4th century and was created in admiration of Jamus, the God of passages and gates.

Another arch is the Arch of the Money Changers, which isn’t actually on the Forum Boarium, but 2 blocks behind it, just behind the Arch of Janus. This is arch is also attached to the San Giorgio al Velabro church (a later build, but a beautiful one at that), so it’s definitely worth the detour to see these buildings as well as the Forum itself.

How to plan the perfect trip to the Forum Boarium ?

The Forum Boarium is free to visit, and almost blends in to the modern city with traffic filling the roads and locals going about their everyday business. This means that the Boarium is a great day out for those on a budget.

Go on a Forum tour

The only issue is that the Forum is quite a way out from Rome’s historic centre. So if you’re not confident navigating the city’s public transport, you should consider joining a tour.

Whilst you don’t need Forum Boarium tickets, a tour guide could fill you in on the historical significance of the architecture in this area. Learning Forum facts can be a great way to bring the area to life.

Visit the Forum Boarium by yourself

However, if you plan on visiting the Forum Boarium without a tour guide, it can be worth getting there earlier in the day. This Forum might not be as popular as the ticketed attractions, but it still gets very busy as the day goes on. Lots of tourists choose to visit this area after first visiting some of the main attractions, so the crowds build up as the day progresses.

How to skip the lines at the Forum Boarium ?

No Forum Boarium tickets are needed to enter the area, as it’s become integrated as part of the city. However, queues around the temples do still build up, so if you want to avoid waiting in line to see them, get there earlier in the day.

Not many tourists start their days off with this stop, so it’s usually much quieter in the morning than in the afternoon.

Should you book a guided tour ?

Booking a guided tour of the Forum Boarium can make your visit a much more interesting one. With a tour guide spouting Forum Boarium facts and explaining the history and importance of it and the remaining temples and archways, you’ll be able to cast your mind back in time to Ancient Roman times, and imagine the Forum as it used to be.

Unlike tours of the main Roman attractions like the Colosseum and Roman Forum, tours of this area are often very affordable, even for those traveling on a tight budget. So a guided tour can be a great way to enhance your Forum visit without breaking the bank.

Is the Roma Pass need to visit Forum Boarium ?

You don’t need a Roma Pass to visit the Forum Boarium as this isn’t a ticketed area. But that being said, if you have a Roma Pass, you can definitely benefit from the free travel it provides when visiting the Forum.

However, the Roma Pass isn’t worth it as a travel card alone. The Roma Pass is meant for those who plan on seeing as many attractions and traveling around as much of the city as possible. You can check prices here.

The Forum Boarium is a great place to visit if you want to see real Roman architecture blended into the modern day city. There are no tickets needed for this location, which means it can be an affordable sightseeing trip. And if you have the Roma Pass, you’ll be able to travel to the Forum using your free travel, making the day even cheaper.

There are a few guided tours you can join if you want to make the most of the area and learn about its history, however you’ll have to pay a small fee for these.

However you decide to visit the Forum Boarium, it’s a stop worth seeing, and it makes a change from the ticketed attractions. The Forum Boarium is more like living history.