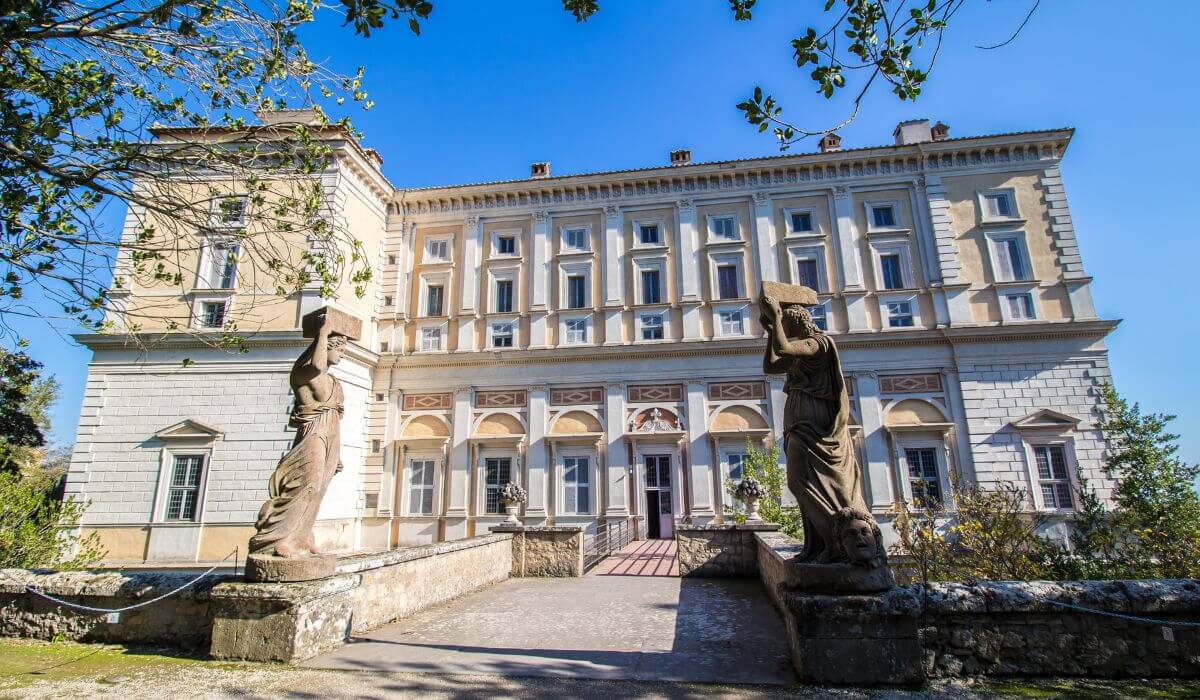 The Villa Farnese looks pretty interesting from the air. It’s shaped like a pentagon with a 5 sided courtyard in the middle.

It sits imposingly over the town of Caprarola, which is located just over 50 kilometers from Rome. It is known for its renaissance style architecture and striking appearance.

If you are looking for a little day trip outside of Rome then the Farnese Villa Rome could be a place for you to visit.

A Short History of Villa Farnese

In the early 16th century, a man who would later become Pope Jean Paul III took possession of a plot of land at Caprarola.

He had grand designs for the space – planning a striking fortification atop of the town. This 5 sided structure or fort became the blueprint for the later villa.

This was commissioned by his grandson in 1556, with the view to turn it into a grand country home. Giancomo Barozzi da Vignola was nominated as the architect by Cardinal Alessandro Farnese to begin the works.

He is credited to be one of the most famous and influential architects of the Renaissance period, particularly leading the way amongst those showcasing a mannerist style.

An interesting fact – the remains of Vignola lie in the Pantheon in Rome!

Facts about the Farnese Family

The Farnese family were pretty influential. Amongst their line included dukes, cardinals, popes and even the future Queen of Spain.

Their position of power grew in the 14th century as they acquired land and other possessions in return for political favors. When the aforementioned member of the Farnese family became Pope John Paul III there was no shortage of wealth and power.

The line is believed to have died out in the 18th century with Queen Elizabeth of Spain being the last heir – she passed her successions on to the Bourbons.

Well, let’s ensure you don’t mix the two up and end up at the wrong place!

The exterior of the stately home is pretty striking.

The Villa Farnese architecture features a prominent staircase leading to the upper levels. You certainly get a wow factor as you approach the central piazza from the little town of Caprarola.

The most striking Villa Farnese construction parts for us are the beautiful arched windows interspersed with columns.

Just as interesting as the outside, the interior too does not fail to impress.

The Villa Farese floor plan indicates a number of rooms, each more interesting than the next.

Spread over 5 floors, each wing or floor had its own specific function.

On the first level, the Room of Hercules provides sweeping views over the town and is known for its Villa Farnese frescoes of Hercules.

In this part of the building there are 2 luxury 5 roomed apartments with beautiful Villa Farnese ceiling details. Of note in the villa, the family were certainly not bashful when it came to declaring their successes.

All over the rooms you can find frescoes that depict tales from lives of important Farnese family members!

What Makes The Villa Farnese Gardens So Attractive?

The gardens around the villa are also worth a look.

They contain themes carried through from the house itself, including nods to the original fortress. Little drawbridges cross over a moat and there is even a whole wood to be explored.

Located in the grounds of the Caprarola Villa Farnese is its famous casino.

Do You Need a Guided Tour for the Best Villa Farnese Experience?

We recommend taking a guided tour direct from Rome and benefiting from the whole package. Then you won’t need to worry about transport or how to get there. This one costs just €172 and includes transport as well as a delicious local lunch.

Farnese Villa Location & How To Visit

The Farnese Palace Caprarola is located just over 50 kilometers to the northwest of Rome.

If you do not want to take a guided tour yourself, you will have to make your own way there. A taxi will take about one hour and costs around €100.

You can also take a bus direct from Rome Saxa Rubra for just €3. Check out the location of this beautiful villa on our Villa Farnese Map.

You can visit the place between 8.30am and 7.30pm daily on Tuesdays through Sundays. The house is closed on New Year's Day and Christmas Day, as well as every Monday.

Tickets cost €10 for standard adult entry and can be purchased in advance on the website – link here.

There is a 1 Euro reduction for teachers or other educational professionals, and students pay only €7. Children under 10 and those with disabilities can enter for free.

If you are coming the whole way out to Caprarola then you may be interested in spending a few more hours in the area.

Try Viterbo Cathedral, a food tour or a walk around the local town shops for souvenirs.

Looking to overnight in the area?

Then here are three great hotel choices near the town of Caprarola:

Who painted 'A Scene In the Grounds of the Villa Farnese, Rome?'

This beautiful painting of the gardens of the Villa Farnese was completed by Hubert Robert.

They are not the same so don’t get confused. The Villa Farnese is a stately home located 50 kilometres out of Rome. The Palazzo Farnese is right in the heart of Rome.

When was Villa Farnese built?

The country house was completed in 1504.

The Farnese Family commissioned and had built this striking villa.

If you have a bit more time in Rome – for example, if you are staying for a week or more – then consider taking a day trip out to the Villa Farnese Caprarola Italy.

Of course, there are lots of other day trips available from Rome.