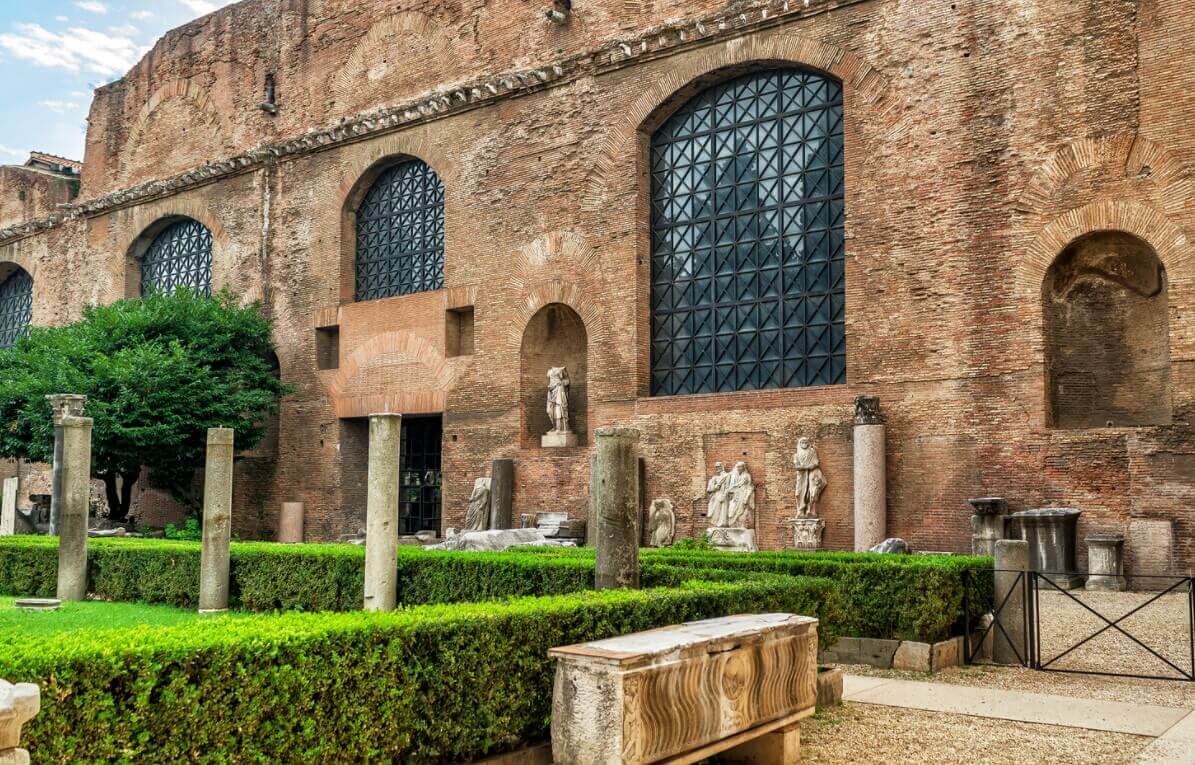 These former public baths were named after the Roman Emperor Diocletian, and are located within Rome. Construction started in 298 AD and was finished in 8 years. Known for being ancient Rome’s biggest baths of their kind, the brick and marble structure is a sight to behold.

They served the local community for relaxation, socialising and sport for over 200 years before falling into ruin. Following decades of reconstruction works, the baths are open to the public in all their glory for you to visit! Read on to find out more.

About the National Roman museum – Baths of Diocletian

The baths are part of the National Roman Museum – a collection of amazing statues, art and other artefacts spread across 4 museums in Rome (more about them later).

Many of the artefacts from the museum itself have been distributed elsewhere. But don’t worry, there is more than enough to see. Opened to the public from the year 2008, the Baths of Diocletian architecture is hugely impressive.

Check out in particular the exhibition on early Latin peoples, and marvel at how this structure was even build way back then. Beautiful frescoes can be witnessed high up on the ceilings, and don’t forget a long stroll in the gardens to marvel at the artwork on display. Definitely on our list for things to do in Rome once you have hit off the Colosseum and the Vatican City.

The massive structure, which also included a gym, library and lots of different areas for bathing, spread over 130,000 metres squared. Here, hot, cold and warm baths were available for public use.

From the huge site, located on the Viminal hill, only a small portion is open to the public, but you can really appreciate the scale. Especially if you climb up the Santa Maria degli Angeli for the best views.

The plan for the Baths was modelled on the Baths of Caracalla, with the aim of being bigger and more impressive. The central area was located within a large square, which totalled 376 x 361 meters, and became the focal point for life in the area.

The construction of the Baths of Diocletian Rome took 8 years, during which many of the slaves died of exhaustion. The Santa Maria degli Angeli Basilica was constructed in memory of those that lost their lives.

Where & How to Get to Baths of Diocletian Tickets

Ticket prices are pretty reasonable as they cover all 4 of the Roman Museum complexes.

This means you can also visit the following cool attractions with your pass:

Here is the cost breakdown for entry:

Get your Baths of Diocletian tickets online here today. If you do not have access to the internet, or prefer to buy in person, simply purchase at the gate.

Also get your skip the line tickets to visit the National Roman Museum here. Tickets are valid for three days, so you can take in all of the Roman Museum complexes. We recommend you do the Baths and the Palazzo Massimo together in one day.

Your ticket will include a Baths of Diocletian map (a PDF if you book online) and will give you the layout of the site.

The Baths of Diocletian entrance is located on the Viale Enrico de Nicola, 00185. Once you have got in, spend the time touring the baths first, which are simply stunning. You will then have time to take in the gardens and the more traditional museum displays.

Check out this map below of the awesome structure to help you plan your visit.

Do the Baths of Diocletian accept Roma Pass?

Good news for Roma Pass holders. The pass includes access to the Baths, and the other 3 attractions in the National Roman Museum Crypta Balbi, Palazzo Altemps –and Palazzo Massimo alle Terme.

Do the Baths of Diocletian accept the Rome City Pass?

Yes, the Rome City Pass also includes entry to the Baths and the three other National Roman Museum sites!

How to enter the Baths of Diocletian?

You can use your ticket bought online to enter the Diocletian Baths. Of course, if you do not have access to a computer you can also buy your tickets at the entrance. The Baths are located on Viale Enrico de Nicola, 00185 Roma.

How were the Baths of Diocletian named?

Commissioned by Maximian for his co-Emperor Diocletian, the baths were dedicated to Diocletian.

Who built the baths of Diocletian?

Maximian ordered the construction of the Baths of Diocletian; however, you can be sure he did not lift a finger. It is said that thousands of Christian slaves dies during the construction. As a result, the nearby Basilica of Santa Maria degli Angeli was constructed in their memory.

When were the baths of Diocletian built?

The baths were commissioned in 298 AD and took 8 years to be completed. They were an important part of the social fabric of the area and used for over 200 years.

The Baths of Diocletian are, in our opinion, a must-see. The ticket prices are really reasonable too, considering you can see the other sites of the National Roman Museum.

Once you have planned your trip here and secured your tickets online, it is time to sort out the rest of your trip. Check out some of the other great things to see and do in Rome in between visiting the National Roman Museum here. We’d love to know how you get on during your trip.