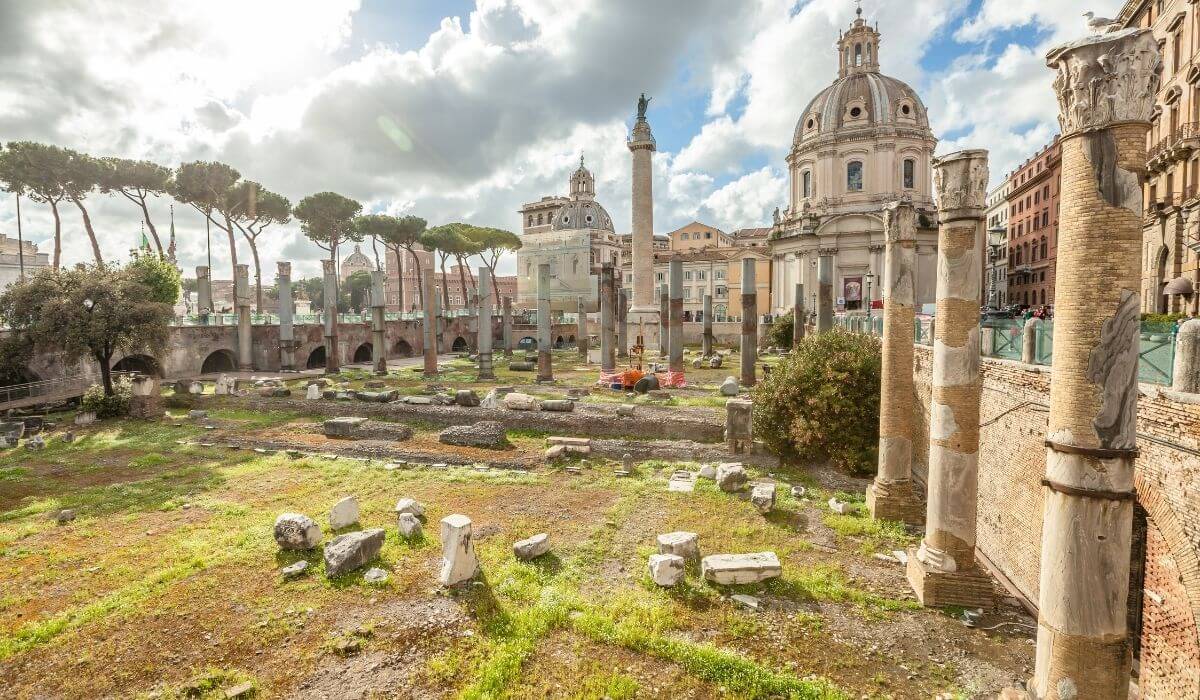 The Basilica Ulpia was – despite its name – not a religious building. It was a center of business and commerce, to which many of the political functions also moved.

Previously, they had been headquartered in the Roman Forum. The Basilica Ulpia Rome remained in use until the new Basilica of Maxentius was built in 312 AD.

Let’s explore the Forum of Trajan Basilica Ulpia together.

Commissioned by the Emperor Trajan along with the Forum of Trajan and completed in 112 AD, the Basilica held numerous law courts and civic buildings.

Trajan of course wanted to design something spectacular so that he could be remembered for his impact on Roman history. Thus, the Forum of Trajan and the accompanying Basilica Ulpia – as well as the Column of Trajan – were born.

What Is the Basilica Ulpia Made of?

The large square at the Forum of Trajan was clad in spectacular white Italian marble. The Basilica itself had columns of gray Egyptian granite, with a stunning floor of different colors of marble.

On the roof, bronze tiles would have made for a brilliant sight, and the main porch was held up by yellow marble. All in all, the Basilica was a striking display of design and triumph for Trajan.

It was decorated with the spoils of victory and wars, and many of its impressive columns still stand to this day.

Who Built the Basilica Ulpia?

The Emperor Trajan built the Basilica Ulpia – and the wider Forum of Trajan complex – in order to display his power.

He had just won the Dacia war, so there were plenty of spoils to be displayed in its impressive structure, as well as to fund the structure.

The Basilica Ulpia architect was Apollodorus of Damascus. He was also responsible for the design of the entire Forum of Trajan design as well as the impressive square.

What Was the Basilica Ulpia Used for?

Unlike other Basilicas you may have heard of – such as the famous St Peter’s Basilica – the Basilica Ulpia seems to not have been used for any religious purposes.

Rather, it served as a symbol of the presence of the Emperor, as well as courts for legal proceedings. It was a place for justice administration as well as commercial activities inside its large covered hall.

What Happened to the Basilica Ulpia in Rome?

Today, the remains of the spectacular Trajan’s Basilica Ulpia consist of the remnants of some of the columns, with the column of Trajan still standing proudly amongst the ruins.

Eventually, the legal and commercial functions of the Basilica were transferred to the newly built Basilica of Maxentius in 312 AD. As the Middle Ages got underway, it collapsed a little, and was largely demolished.

As was common in Rome throughout its history, the stones and marbles were reused in order to build other structures in the area.

What Characterizes the Architecture Basilica Ulpia?

At almost 60 meters wide and 159 meters wide, the Basilica is designed with a huge central nave, alongside which run four side aisles.

At 40 meters high it was designed to show the importance of the function of the Basilica. A second floor above the main hall was constructed so that spectators could watch any proceedings that were going on in the courts below.

One of the main and striking features of the Basilica Ulpia was its collection of grand columns throughout the building which supported the roof.

Get an idea for the structure of the Basilica Ulpia with this plan.

Here you can see the location of the Basilica within the wider Forum of Trajan, with its distinctive semi-circular apses on either end.

Basilica of Ulpia Exterior: Was It Beautiful?

The striking gray and yellow marble columns offset with gilded statues of Trajan and the spoils of war made for a beautiful appearance.

The bronze roof added to the scene, leading a passing traveler, Pausanius, to comment specifically on its splendor. Walking up across the square of white marble, it surely was a striking sight.

What Else You Can See at Trajan’s Forum?

The Forum of Trajan is well preserved and worth a look on any itinerary of Rome.

Aside from the ruins of the columns of the Basilica, you will still be able to see the huge Column of Trajan which stands at a striking 38 meters tall.

Back in the day its view would have been obscured by the Basilica, but now you can see it in all its glory. You can also check out the ruins of a temple as well as Trajan’s red brick market where merchants would have sold their wares.

In 2014, plans were launched for the reconstruction of the Basilica Ulpia to its former glory. Costing an estimated 1.5 million euros, largely donated by Alisher Usmanov, an Uzbek businessman, works began in 2021.

Do You Need Tickets for Visit?

You can get tickets for entry to the Trajan Forum at the gate, starting from around €12 euros per adult with reduced entry for children.

You may however get more value from the experience if you enter the complex as part of a guided tour. Check out an example here of this cool Ebike tour which takes in a multitude of attractions in Rome including a stop at Trajan’s Forum!

And if you want more detail, perhaps you’ll want to consider a private tour of the complex such as this one.

The complex is closed on Christmas Day, New Year’s Day and May Day and shuts early on New Year’s Eve and Christmas Eve.

How to Get There?

You can take Metro line B to the Colosseum, then head to Trajan’s Forum in about 10 minutes on foot.

Here are the top asked questions we receive about Trajan’s Forum and the Basilica Ulpia.

When was the basilica Ulpia in Rome built?

The Basilica Ulpia was completed in 112 AD.

Which Emperor commissioned the Basilica Ulpia?

Emperor Trajan commissioned the Basilica Ulpia in a bid to show his military strength after a victory in the Dacian war. Architect Apollodorus’ Basilica Ulpia design was selected for the plans.

What colors were the marbles of the floor of the Basilica Ulpia in Trajan’s forum?

Multi colored marbles of red yellow and gray were used on the floor of the Basilica.

With so many ruins and forums to see in Rome it can get pretty confusing trying to plan your trip!

Why not consider a city pass – a handy card that captures many of the best sights in Rome in one place – to make it easier to manage your budget. Check out some options and reviews of what is available here.