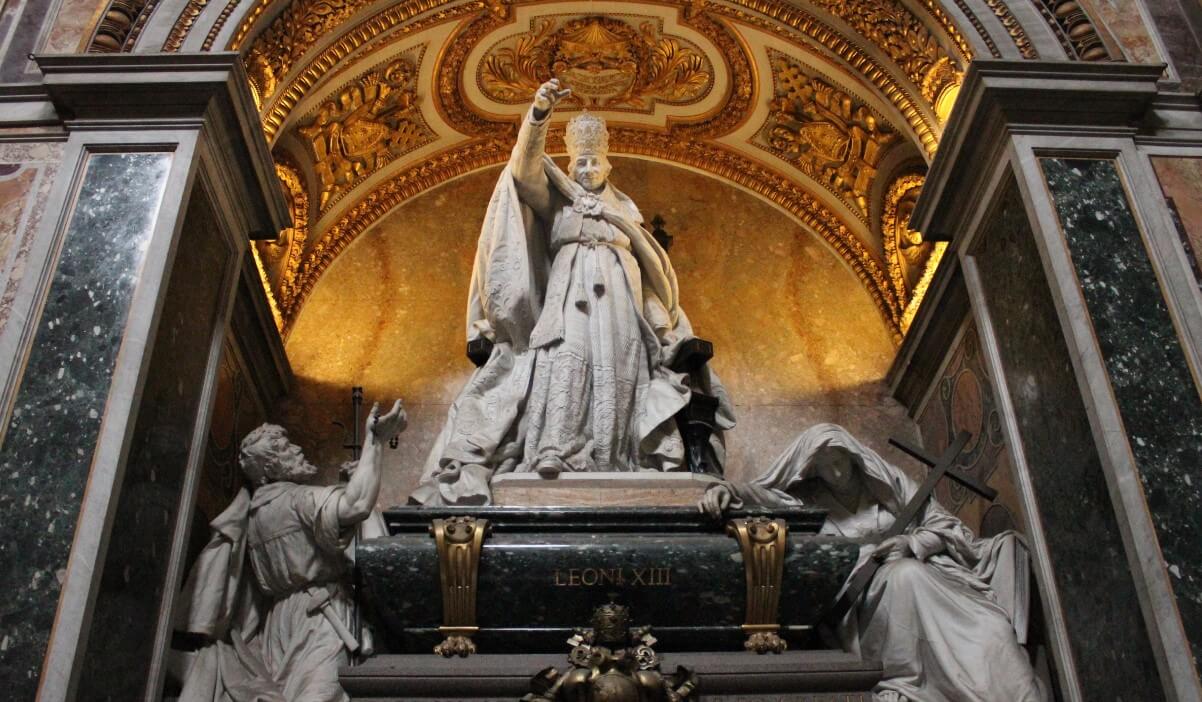 Basilica of Saint John: All About San Giovanni in Laterano

Completed in 324 AD the Basilica di San Giovanni in Laterano attracts attention especially for its beautiful cloister. You may also not know that it is here – NOT St Peter’s Basilica in the Vatican – that is the official seat of the Pope!

The History of Basilica di San Giovanni in Laterano

The ancient Basilica di San Giovanni in Laterano was built in the 4th century by Emperor Constantine the Great. This guy is credited with having brought Christianity into the folds of the Roman Empire.

Now believed to have been constructed on top of an even older site – a fort – which in turn had been built on beautiful villas, the site is extremely valuable in terms of ancient history. Eventually, Constantine gave the building to the papacy and Pope Saint Sylvester I lived in it in its early days.

During the 14th century two fires spread throughout the Basilica, and it ended up going into a state of disrepair. What architecture you see today at the basilica of Saint John therefore also contains restoration works that have happened over time, with the main building having been demolished. The new exterior for example dates to 1735.

Internally, you can see the open-air apse which is full of mosaics in what was originally the banquet hall. Although the walls themselves are more modern, the mosaics are said to be original. They depict images of Christ and his followers.

In 837 – long before the fires of the 14th century – an earthquake completely destroyed the structure and it was rebuilt more or less true to its original form.

Today, the Lateran Cloister is perhaps the most stunning feature in the building. Dating to the 13th century it is dominated by marble sculptures and columns.

What to See at Basilica of St John Lateran

Open between 9am and 6pm, the Lateran Cloister is a masterpiece of Vassalletto. Extremely peaceful and stunning at the same time you will be able to check out the sculptures and marble architecture before you make your way out to the sun!

A little church located opposite the Basilica contains what is known as the Holy Steps. Rumoured to have been brought to Rome by Saint Helena in the fourth century AD, devoted catholics claim that these are the very same steps that Jesus climbed during his sentencing by Pilate.

The Tombs of 6 Popes

6 Popes have found the San Giovanni in Laterano to be their final resting place. Pope Leo XIII is here – he was the last Pope to die not buried in St Peter’s.

The Statues of the Apostles

Located within the gaps deliberately left in the architecture of the Basilica are the elaborate sculptures of the 12 apostles. Commissioned in the 18th Century they are a real work of art, with incredibly intricate features that make for a stunning display.

Dedication of the Lateran Basilica

Getting Tickets for San Giovanni in Laterano

Good news – entry to the Basilica is free!

The church is usually open daily from 7.30am to 6pm throughout the year.

Finally, Tram line number 3 can get you from the Colosseum to the Basilica directly.

Where to Stay near Archbasilica of St John Lateran

There is plenty of accommodation around the Archbasilica of St John Lateran. In fact, there are a huge number of private guest rooms and suites just under half a kilometre from the church, as well as hotels.

If a hotel is more your thing then you have plenty of choice too. The Relais Monti offers amazing decor in a great location. There is a buffet breakfast on offer and you are just a 7 minute walk from the Basilica. Rooms start from just €80.

Who was St John Lateran?

St John Lateran isn’t actually a person. The church is indeed named after John, however it is John the Baptist as well as John as well as St John the Evangelist.

When was the Laterano Basilica built?

The original Lateran Basilica Rome Italy was constructed in 324 AD and has been reconstructed several times since.

When is the best time to visit Basilica di San Giovanni in Laterano?

Visit the church early in the morning to avoid the crowds.

Who is buried at Basilica di San Giovanni in Laterano?

There are 6 Popes buried in the basilica including Pope Leo XIII.

What is the Basilica of St John Lateran dress code?

You should adopt the standard dress code that is applied to the Vatican - this includes no shorts or bare shoulders.

Now you can impress your friends with all you know about the Basilica of St John. Next, check out some more attractions around Rome here.